Case Study on How a Left Wing Brain Works

I have been told that among the common psychological characteristics evident in conservatives are: 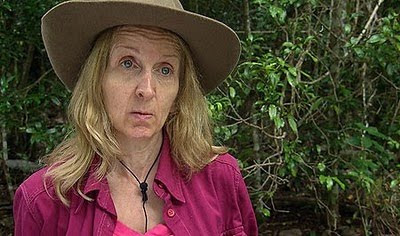 Gillian McKeith is a TV “health guru” advocating a holistic approach to nutrition and health, promoting exercise, a pescetarian diet high in organic fruits and vegetables. She recommends detox diets colonic irrigation and supplements, also making statements that yeast is harmful, that the colour of food is nutritionally significant, and about the utility of lingual and faecal examination. 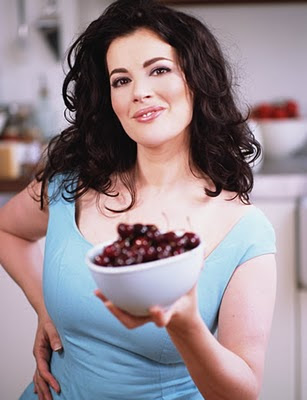 Nigella Lawson is a TV cook, who eats nothing but meat, butter and desserts. So forget “join a gym and eat more celery”...remember "everything in moderation."

How does a right wing brain process this email?  1. Very quickly get past the critical thinking part. 2. Arrive at conclusion:  this proves that eating meat and doing everything the big corporations say to do will make you healthy and beautiful. 3. Hit "Forward to all contacts" key, giving cognitive closure.

How does a left wing brain process this email? 1. Think who is sending these ridiculous emails now? 2. Think how easily some people are duped by anything they read. 3. Ask some questions such as, was Nigella's picture taken when she was 50? After all the caption says "This woman is 50.", not "This woman is 50 now, but in this (possibly photoshopped) picture she was 41. Second question: Why is Nigella holding a bowl of cherries if she only eats "meat, butter and desserts"? A bowl of cherries is fruit, isn't it? Maybe you consider a bowl of raw fruit a dessert, but I don't. To me dessert is cake, pie, or ice cream. Raw, unprocessed fruit is health food. If you think raw fruit is a dessert, you probably have a healthier diet than me.

4. Left wing brain looks up this miracle woman on Google, because a left wing brain is inclined to be skeptical that a fit, youthful, 50 year old woman would not exercise.

5. Left wing brain spends a little time looking at some other web pages such as this one. Puffy Eyed Nigella

6. While looking at the above website, the left wing brain notes that Nigella looks a bit worse for wear, and 7. Nigella admits to going to a gym, which sort of contradicts the email, but not really if you read it right. It never said Nigella does not go to the gym, it merely told you to forget about going to a gym.


So to summarize the difference in brains. Right wing brain handles the job quickly, efficiently, takes action and moves on to other important stuff. Left wing brain dilly dallies, faffs about, and in the end does nothing. Second conclusion, 99% of forwarded emails are probably going to come from right wing brain type people.

By the way, what does the other woman, Gillian McKeith, look like in a flattering photo?
http://www.malextra.com/celebrity_interviews/Gillian+McKeith+Talks+Diets+Workouts+And+Poo-62137.html
Copyright the Lost Motorcyclist