Advertising Standards of Canada Skewer Themselves in an Ad 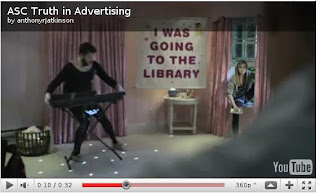 Last night I watched a commercial on TV that I am going to nominate for an academy award in the category of Fearless Advertising. This ad was an example of "That Idea is so Crazy that it just might work". I did not notice at the time which program carried the ad, as it only struck me this morning. But the only program we watched on TV last night was "Tipping Point" by David Suzuki. And this program was about the Alberta Tar sands.

The advertisement was a silly one from the Advertising Standards of Canada, where a teenage girl is caught by her father, sneaking out of her bedroom window, and she hires three mimes to announce that "I was going to the library". The punch line of the ad is "Dressing it up doesn't make it true". The video of the ad is on this link, in case you have not seen it.

Honestly nothing clicked for me right away, but later I remembered. I have written a blog about this organization, about how they OK'd an advertisement claiming toxic sludge was "like yogurt". So according to the Advertising Standards, that's not a lie. But according to most people it is a lie.

After a ruling like that, they should hang their heads in shame, caught in the act of lying. But apparently that's not the way advertising people think. Their motto must be "When caught in a lie, repeat it louder and longer, right to their face".

It seems they have an actual code of conduct, which you can read online. I assume it is kind of a study guide to deception for advertising people.

Their advertisement is a perfect parody of what the Advertising Standards people did themselves. Caught in a lie, they called in the mimes and the party balloons to announce that they never lie. And of course they must run it during an Alberta Tar sands documentary. Why not? Despite what they say, all advertising is based on "Dressing it up will make it true"

The documentary itself was quite hard hitting about the oil sands, and I would think the oil companies will not be liking it very much. It exposed their fraudulent water quality monitoring. Of course, what can you expect when the only people to monitor the water are hired by the oil companies. They apparently did no monitoring, and claimed that any sludge in the Athabasca river was naturally occurring because the river flowed through bituminous soil, and always had. Also, there were no toxic outflows into the river, as all water borne toxins were held back behind dams in toxic pools. Finally, an independent scientist got tired of being lied to by the oil people and did a scientific investigation where he found a way to separate the naturally occurring toxins from those falling out of the air from the processing plants. His evidence was enough for our Conservative Environment Minister, John Baird, to admit that we didn't have exactly a "World class" pollution monitoring system. And knowing the Conservatives are funded by and based in the oil area, that is quite a humbling admission.

Another part of the documentary I found interesting was the connection to James Cameron and Avatar. I did not notice when I saw the movie, but several of Avatar's depictions of mining on the planet Pandora were inspired by the Alberta Tar Sands, apparently done by a background artist from Alberta. And so the movie was similar enough to the Tar Sands that James Cameron later made a trip to Alberta to see the Tar Sands for himself. I didn't know about that tie in when I saw the movie last year. But it was very clear after seeing "Tipping Point". When I was watching Avatar, I was thinking it was based on Talisman Oil in the Sudan, where they actually helped the Sudanese government bomb natives who got in their way. That is obviously not happening in the Canada Tar Sands project.