Sarah Palin is Not to Blame for the Killings 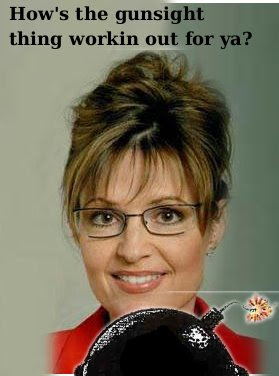 Sarah was obviously not to blame for a deranged lunatic killing people. However she is likely to take some heat for her overblown rhetoric.

Sarah is simply pushing the envelope of what is permissible, to the point where other people are asking her to turn it down. But she doggedly pushes ahead, heedless of the advice. After all, what could go wrong? Even after several other liberals or democrats have been murdered by other deranged gunmen.

Then, the unthinkable happens, and the person she set crosshairs on is actually shot in the head by a deranged lunatic. Even though that lunatic may never have set eyes on her campaign graphic.

Let's put it in Alaska terms, and explain it directly to Sarah.

Sarah: You're out there shooting moose. A neighbour asks you to stop shooting in the direction of his property with your fully automatic long range assault weapon with hollow tip bullets. You tell him to go to hell, this is Alaska and you'll do as you please. Then some deranged maniac comes along with a similar weapon to yours and deliberately fires an entire clip into your neighbour's house, killing his wife and daughter.

It was not your fault, but there are going to be bad feelings. Maybe you should have been a bit nicer before the killings.

Sarah is not responsible for the killings, but she could have heeded some warnings ahead of time: especially from Elisabeth Hasselbeck, and from Gabrielle Giffords.
Copyright the Lost Motorcyclist