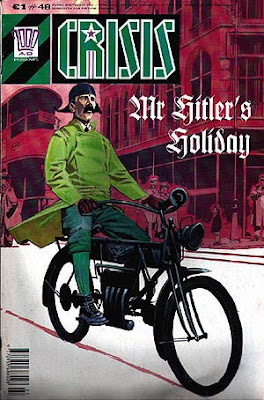 I came across yet another bad image for motorcycling, as if the Hell's Angels were not enough. Apparently Hitler rode a motorcycle in the comic book "The New Adventures of Hitler". If Mr. Hitler likes motorcycles, what else might he like? I wanted to find out.

The following summary borrows from this Wikipedia article.


Hitler became such a hated figure that he can scarcely be mentioned without adding "May his soul be cursed." So now I have that out of the way, what kind of person was he. Well, he was the leader of Germany, and his philosophy was called Nazism. Nazism was based on creating a common purpose among the German people and leading the German people to their destiny. The Nazis were also famous for their determination and ruthlessness in achieving their goals.

So what were those goals? I decided to break Mr. Hitler's interests and hobbies down into three major groups. Good, Bad, and I Don't Know.

The Good (depending on your point of view)


The Bad (Nazis are generally considered bad, so this should be non-controversial)

"About religions that preached love, tolerance, and equality “in contravention to the facts”, Hitler said they were false, slave religions, and that the man who recognized said “truths” was a “natural leader”, whilst deniers were “natural slaves”; hence, slaves, especially the intelligent, continually hindered their masters with false religions. Martin Boorman  was an extremely anti-religious Nazi, this does not reflect Hitler's opinions.  Martin said "The task of the priest consists in keeping the Poles quiet, stupid, and dull-witted." (the Nazis killed almost 16 per cent of the Polish Catholic clergy)

Apparently Hitler had problems accepting the "Turn the other cheek" quote from Jesus.

So there you have it. Mr. Hitler's resume. Any resemblance to persons, religions or political parties, present and past, is strictly coincidental, and no offence is meant by it.