Is Science History, or is it Toast? 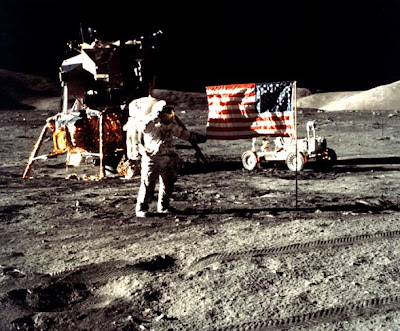 I have a book called "Unscientific America: How scientific illiteracy threatens our future" by Chris Mooney and Sheril Kirshenbaum. Some of the public opinion changes are shocking over just the last ten years. In 1999, 47% of Americans thought scientific advances were among the nation's most important achievements. In 2009 that was down to 27%. I think even 47% is a disastrous number for a country like the United States of America. I would think 47% might be appropriate for Iceland or Vietnam, not for the country that sent men to the moon.

I have also noticed the decline in respect for science and scientists in the USA. I remember it being much higher back in 1969, when people the world over were amazed at TV broadcasts of men walking on the moon. But scientists have only themselves to blame for the decline. After all, here we are in 2011, and nobody is walking on Mars. Nobody is even walking on the moon any more. And there are more perceived failures. We have not cured the common cold, or cancer. We cannot predict earthquakes. Cars still can't fly, in fact they can't really go a whole lot faster than they could in 1969. We still don't have regular flights to the moon as promised in the 1969 movie falsely called "2001 a Space Odyssey". We can't predict the future, we don't have teleporters.

Today science has an increasingly influential rival. Think of the advances being made by fundamentalist religions. While nuclear weapons stand idle, paralyzed by political correctness, religious extremists have invented easily deployed "suicide bombers". Fundamentalists also have made great strides in faith healing, and have been able to cure everything from ALS to infertility. They also have answers to questions that remain a puzzle to scientists, like "where does life come from?", "who died to save us from our sins?" and "How did all those animals ever fit on the ark?". Just last week, my sister informed me that Jesus had repaired both of my nieces' cars at minimal cost, just by prayer alone. And last year, he also cured an allergy.

In foreign affairs, while NGO's and government agencies seem to be wasting their time in Haiti, Christian Fundamentalist faith healers can cure up to 300 sick Haitian people a day. How is science ever going to compete with that?

I think one of the biggest blows to science came with the fall of the Soviet Union. There was a Godless society that placed all its faith in science and technology to try and match the United States. When it fell, it was a Godly man, Ronald Reagan who claimed responsibility. And furthermore, the Soviets were beaten in a war against religious extremists in Afghanistan. What more proof do we need that science is a thing of the past?