Forget About the Price of Tea in China. Think Buick. 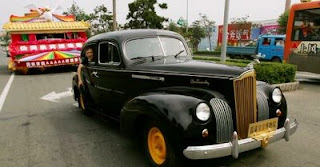 I was surprised to find out that GM sells more vehicles in China than in the USA. So, imagining hordes of Silverado pickup trucks with gun racks and cowboy hats cruising downtown Shanghai, I went to look up some confirmation.

While it is true that GM sells more vehicles in China than the USA, there are several related facts that make it less surprising. First is that these vehicles may not be "made in the USA", and their brand names may not be recognized by American customers. There is an active partnership between GM and several Chinese companies.

But there is also the story of Buick. The typical Buick owner in America is basically an old fart who can't afford a Cadillac, in China the Buick nameplate is revered. This may be due to the last Chinese Emperor, Pu Yi, having owned a 1932 Buick Tudor.

Picture: Hopefully the Emperor had the good taste to not pimp out his ride as much as this. From this web site http://www.verztec.com/blog/?p=346

From the Wikipedia entry for Pu Yi. I have to confess, it is way too complicated for me to figure out from this, exactly why this guy should set the standard for the Chinese car buying public. In the article I did notice that he was the one who kicked the Eunuchs out of the Imperial Palace. Don't know if that was bad or good. Then he was the emperor reputedly collaborating with the Japanese invasion before WW2, and was captured by the communists and spent time in jail. And somewhere in there, he had a Buick. Then, apparently by some mysterious butterfly effect, GM ends up selling more cars in China than in the USA. Well, I don't get it.

So, GM is selling a lot of Buick branded cars in China. In many cases these cars are rebadged Opels from Germany or Holdens from Australia.

Nice to know that even in China, the marketing of the automobile is based on the sizzle and not the steak.

While I may have been surprised, the "China Car Times" was not, with the headline "No Shocking news: GM sells more cars in China than it does in the USA"

In the China Car Times, the writer is pleading for someone to enlighten them as to why Buicks are not revered in the USA as much as in China. I have no answer for them. Other than the obvious, of course.
Copyright the Lost Motorcyclist