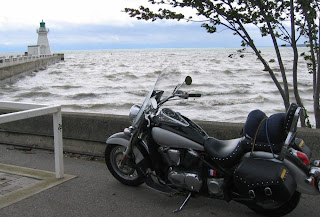 In honour of the next Friday 13th (May 2011), this is my Biker's Guide for the trip from Kitchener to Port Dover, a distance of 87.8 km. I am very familiar with this road, due to the fact that I go there a lot in the summer with my motorcycles. Map here.

This is not a twisty road, so you won't be needing any road race equipment. Likewise, speeds are never over 110 kph, there are no places where you are alone without traffic or police cars patrolling. I guess everybody in southern Ontario knows what I'm talking about since the whole southern part of the province is kind of like that.

So let's start from the corner of Homer Watson and Sterling In Kitchener. This is at Lakeside Park, and if Lakeside Park had not been the centre of a big fight over road right of way in the sixties, Homer Watson would have continued on right into the heart of Kitchener, but it didn't. So the plan is to go more or less the length of Homer Watson, a big multi-lane road with traffic lights and Tim Horton's all the way along. Although it's really not much fun, you will find the traffic does at least move quite quickly, never over 90 kph, but it's a bit of a struggle when I take my Honda 175 with only 15 horsepower. But normally I have my Vulcan 900 Classic.

At the other end of Homer Watson, you have the 401, and just before that is a Petro Canada station, next to a Tim Horton's, next to a McDonald's. Pretty much heaven on earth. And if you turn right at the Petro Canada, you will come to New Dundee Road, which runs west, right beside the 401 for a few kilometers. You need to make a left onto Reichert Dr, which is immediately after Robert Ferris Drive. Now you can go through a bit of nice forest where hopefully you will not hit a deer, and continue down to a fast right hand sweeper, then another right hand sweeper (about 40 kph slower than the last one) then a really sharp curve to the left (under 50) with a stop sign as you come around the corner. This is where you turn left.

You will follow this road over the 401 and turn right at the next junction on Dumfries road. Not only do you have a lot of trucks coming in and out here, but the Police Association has a compound, and there is an extremely rough railway crossing. This is not the most pleasant part of the road, but let's keep a positive attitude. No traffic lights!!!

Well no traffic lights until you cross Cedar Creek Road, a couple of kilometers south of of the tracks. But something nice is coming up, and you want to be sure you are not following a granny in a station wagon before you get to the next nice curve, the downhill s-bend before Wrigley's Corners. Luckily there is a good long passing area just before it. Although I think the sign recommends 50, this curve is often taken by trucks at 100 kph.

Soon after the curves, turn left at the stop sign, then right at the next stop sign and you will be on Highway 24A to Paris. Actually a nice piece of road if the pavement was not upheaved by frost most of the time. Slightly curving, through forests, but slow with a double yellow no-passing zone most of the way. And every 10 metres, another lurch as the motorcycle crosses a frost heave.

Paris Ontario is next, a really pretty town built right on the Grand River. Many restaurants have little decks out the back that overlook the river. The river is just to the east of the main road (on your left). Apparently Paris is named after a plaster of paris factory, and not after Paris, France. So you will not see very much fake French culture staged by the Chamber of Commerce to entice the tourists. A very wise move. And every June, Paris hosts the Canadian Vintage Motorcycle rally, and event I try to never miss.

There are a couple of pedestrian crosswalks to watch out for, and then as you come up the hill on the other side of town, begin signalling a right turn immediately, even though you have no clue where you are going. That's what the sign says to do. So curve to the right, then soon after, you will have another very sharp uphill merge to the right onto highway 2. This hill climbs rapidly with a passing lane and a fairly sharp 50 kph curve in the middle, then a flashing light and a 40 kph school zone at the top that is often a radar trap on school days when the kids are milling about. Half way up, there is a pullout to the right where you can park and look down at the town of Paris if you like.

Finally when you are past all the kooky signs and traffic situations in Paris, you come to the Pioneer gas station, where I often stop because it has pay-at-the-pump, my favourite splash 'n dash place. I hate taking off my helmet to walk inside and line up behind people buying lottery tickets to pay for gas. Instead I just use my credit card at the pump and remember to take my receipt just in case.

As soon as you come out of the Pioneer Gas Pumps, Rest Acres Road is on the left, and that goes down to Simcoe and Port Dover. You will pass a third Paris Tim Hortons that is opening soon, just before you leave town, it will probably end up being a good motorcycle stopping place, just like the other two in Paris.

Now you finally have a bit of plain road, all the way through past Simcoe there is no more confusion. But there is a big problem with police patrols, and lines of cars travelling together. If you follow one of these lines, for sure somebody is going to stop at a side street and everybody comes to a sudden stop in the middle of nowhere. It is a bad place to be looking at the scenery. Good thing there is none. Simcoe is big enough to have traffic lights, so you might have to stop four or five times before you get out the other side.

Once you get past Simcoe, look for the sign for Port Dover to the left. That will be highway 6, and follow it down to the bottom of the hill in Port Dover just before the BB Gas Bar, where you get all the hot dog places and beach shops. The Tim Horton's is on the left, and the still vacant Rossi's restaurant next door is a great place to park a motorcycle. You should have lots of company there. From here you can walk to the beach, to restaurants, to boat cruises, and of course to Tim Horton's. In the summer time, there are deluxe porta potties, and public toilets are open. That's probably why so many people enjoy coming here. Also, to the east and the west are scenic roads following the lake Erie shore.

Picture: My bike at the pier in Port Dover, October 2009. The sleeping bag on the back seat is only there as a backrest. I bought a studded leather roll pack at the motorcycle show to replace it, just for the looks.
Copyright the Lost Motorcyclist