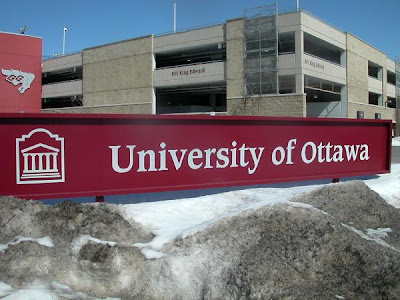 Several Canadians have expressed concern about the stifling of Ann Coulter by the University of Ottawa.

"The costs of free speech may be high, but the costs of doing without it are even higher to our democracy."

"Was it her potential message that Canada found unpalatable? If so, what are the RWB[*] approved messages that might lead other nations to a high press-freedom rating like Canada's?"


And I'm sure there was a lot of similar hand wringing from coast to coast. Relax, people, let me explain. First let's take a measure of the intellectual level of what is being said here. I'm going to go with just one example. Ann Coulter says Arab students should be barred from flying on any airplanes due to the danger they pose. An Arab student asks what alternative they have. Ann Coulter says "Take a camel".

I could go on for hundreds of examples if I cared to take the time, but this would not be the first time that someone is judged by one isolated statement. And, actually, this statement is fairly representative of the type of statements that made Ann Coulter famous and even loved by the racists in the USA and Canada.

Only a Nazi would say that Hitler's call for the gassing of the Jews was a "contentious view". To Jews it goes far beyond contentious, all the way to threatening extermination. Calling a black man a "Nigger" is not a contentious statement, in my opinion, it is a racial slur. Ann Coulter's camel statement is not really a "contentious view" either. It is an ignorant and racist insult designed to threaten and provoke rage. It belongs on Fox News, or on an American Hate Radio program. If the University of Ottawa had not invited Ann Coulter to speak, their students would have been none the dumber for it. On the other hand, by inviting her and finding out how they got played for suckers by the racists, I hope those U of O people learned a valuable lesson. Don't play with fire unless you have asbestos underwear.

We do not need the presence of Ann Coulter in Canada to prove that we have free speech. So by logical extension:
If it does not deny free speech to NOT invite her, it is not suppressing free speech when the affair is cancelled.

Now to deal with the question of who has the greater freedom of the press: Canada or the USA? I will explain this with a simple parable, without mentioning any names. Please do not try to fill in the names for me, because this is a logic exercise only to prove a point. Just keep an open mind and follow the logic.

There once was a country filled with hate, run by one party, the party of hate. All peace loving, tolerant reporters were fired, only the hateful reporters kept their jobs, and they are monitored constantly to make sure they continue to spew hate against the oppressed minorities. Nearby, there was another country of peaceful, tolerant people, who never fired a reporter for their views, even if that reporter sometimes said hateful things. That's because that country was "tolerant" and valued freedom of the press.

One day, at a university in the peaceful country, it was decided to invite a reporter from the hate filled country to give a speech, the better to understand their hate-filled neighbours. A protest was staged, and the speech was cancelled.

So, logically, does that mean the tolerant peaceful country has no more freedom of the press than the country of hate?

I am not trying to make a point about either Iran or Canada. Simply that "Freedom of the press" is not necessarily at stake with one protested speech by a guest reporter. Freedom of the press is a measure of how many reporters fear for their jobs in a given country, based on their views. Or how much pressure is put on reporters to stick with a "party line" in that country, on the average. It is also a measure of whether or not one party line had predominance over the other.

I think the Reporters without Borders probably believed that in Canada, there was less of a tendency to force reporters to conform to one side or another of a political discussion. And there was less tendency for reporters to be fired for disagreeing with their bosses. I'm not sure they would even factor in the Ann Coulter controversy in this measure, as she is not a Canadian reporter and does not normally report on Canadian affairs. Recently there have been several right wing pundits fired for not being right wing enough in the USA. Just last week it was David Frum. I remember during the last political campaign it was right winger Christopher Buckley, son of William F Buckley who came under fire.

And naturally, when you suggest taking away the rights of certain groups of citizens, you may expect them to protest, and not sit quietly and listen to you. The freedom to protest without fear for your life is a part of free speech, and that seems to be doing well in Ottawa.
Copyright the Lost Motorcyclist