New Jacket and Ride to Toronto 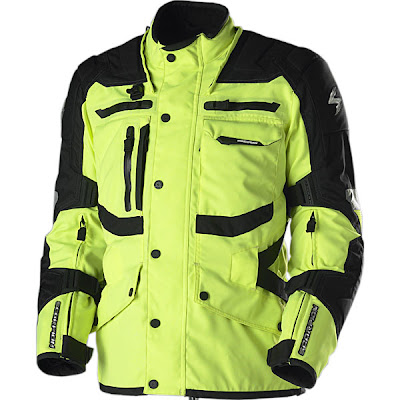 Motorcycle riding is feeling good this year. Not only have I recovered from my operation now, but the weather is almost like summer. The weather is so good that my winter clothing is too hot, and I have been borrowing gloves from Mary Ann and trying to use my summer jacket. While I was surfing the net I came across a motorcycling jacket that looked like an improvement over the Joe Rocket jackets that I have now. It's called the Commander by Scorpion, the same company that makes my new helmet. I checked for local dealers, and decided to go for a ride to Snow City Cycle in Scarborough, to have a look at them. But before I got too far, I stopped at Zdeno's for a new pair of motorcycling gloves. And right in the corner I spied the Commander jackets. It was easy, the colour is so bright you can hardly miss it even among all the other jackets. They had a variety of sizes in the high visibility colour. As I was trying them on, Gerry came over to comment how good the coat looked on me. It's impossible to resist when you find exactly what you are looking for, at a discount, the right size and the right colour, and somebody also tells you it looks good. While we were talking I mentioned to her that I saw her on TV last night. That TV spot might partly explain why the parking lot was full when I arrived.

I bought the coat right there, and a pair of gloves. Luckily I brought along a bunch of bungee cords in case I wanted to buy a new jacket while I was in Toronto. So I bungeed the old coat to the sissy bar. This jacket is a lime green neon glow colour that does not exist anywhere in nature. It's also the same colour as many police vests, which even heightens the visibility, as many motorists are always looking out for cops. When I put it on and sat on the bike I was alarmed that I might have overdone the whole visibility thing. The handlebars, the windshield, the controls, the headlight, the speedometer housing, all were glowing bright neon green just reflected off the coat. It was getting overwhelming. So I decided to really test this out, I would drive to Toronto, even though I didn't need to go there any more.

Toronto is the road rage capital of Canada. It is also the place where drivers are least likely to notice you, where pedestrians and bicyclists also run into you and block your way. They also have streetcars, which is pretty much like driving on train tracks with trains coming at you front and back. But for whatever reason, this coat was like magic in Toronto. Actually a bit like Moses parting the Red Sea. Car drivers gave me space on the 401. When I got onto Yonge Street, a very busy place, cars, even taxis, would let me merge into their lane to get around the delivery trucks. At one point I had to make a left turn on to Bloor street with nothing but a stop sign to help me. I had a pedestrian stop and wave me forward! Then the traffic in the street also stopped and let me through. To be honest, there was a red light on the next block, but I have seen worse behaviour in Toronto.

After driving around Toronto for a while, I was going home on the very congested QEW freeway, and in the next lane a Jeep Cherokee from Massachusetts went by with two girls in it. I was just wondering why college students would go north to Canada for March break, when the passenger rolled down the window and reached out to give me a wave. Will the benefit of a high visibility jacket never end?

Toronto is actually a beautiful city to ride around, only two problems. Too much traffic, even during March break. And I don't understand the parking. Apparently you can park at the curb free if you have a motorcycle, but I could not tell where I was allowed to park, or where there was no parking. I saw some scooters parked on the sidewalk, but they have different rules. So I was driving down the Danforth, which is lined with dozens of interesting outdoor cafes, and I wanted to stop but I couldn't figure out the parking. Then I saw a McDonald's with its own parking lot. Finally, the kind of parking I understand. I'm sure if Mary Ann was with me, there would have been comments, but on my own I often unconsciously end up in McDonald's parking lots.

Much of this drive was almost too warm, which is a first for me, in Canada anyway. One roadside billboard in Burlington announced the temperature as +20c. (I have got to put the + there, this is Canada, it's March, and even -20 could be interpreted as too warm.) The only snow I saw was on the ski hill near Milton.

Picture: The Scorpion XDR Commander jacket. You computer screen is most likely not able to show the colour correctly, so you have to trust me that it's really bright.
Copyright the Lost Motorcyclist