Everything You Need to Know About Engine Performance* 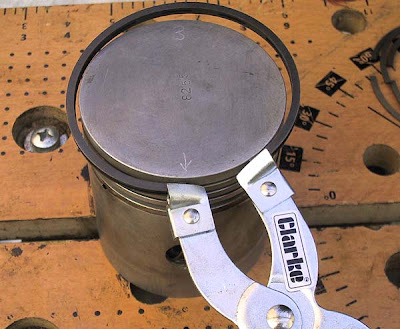 * But were afraid to ask.

I did mention in an earlier blog that horsepower is not what limits top speed or cruising speed. But there are a lot of myths out there about engine power that need to be addressed.

A typical question about engine power is this: What can I do to my engine to wring more power out of it? And it has to be cheap! I need to keep up with my friends 1000 cc sportbikes on my Honda Shadow 600.

If that is the type question we start with, I feel there is a need to back up to the fundamentals, and work forward from there. I am first going to assume that your friends have (wisely) not lent you any of their 1000 cc sportbikes for a high speed run. If they had, you would be half way to answering your own question. (The answer is nothing, no chance.) And it's not just engine power, it's everything from seating position, to tires, to chassis stiffness, shock absorbers, even the footpegs.

But let's get back to engine power, because there is another statement which I find just as weird. "My Vulcan 900 feels too stressed on the freeway at 120 kph, so I need to buy a bigger bike." For every person who is trying to push a 600 cc Shadow past it's limit, there's another one who is afraid to drive a bike at speeds well within its design potential.

Let's just start off by looking at how an engine makes horsepower. In a word, it's by turning. Each turn, or revolution of the engine, draws in 600 cc of fuel (On a Shadow 600 anyway). The 600 cc of fuel is not liquid gasoline, it is air with gasoline vapour in it, mixed just right so that when you light a spark, the gasoline vapour turns to carbon dioxide, and releases a lot of energy while doing so. The faster the engine turns, the more fuel it takes in, the more often it converts the fuel to energy, and the more power it produces.

There is a limit on how fast an engine can go. (Also how slow, but that's not relevant to making power) The limits are set by the construction of the engine. Some piston engines can go to 18,000 rpm or so, others may be limited to 3,000. Why the difference?

One of the limitations of the engine is vibration. Many parts inside the engine move back and forth and spin. Any spinning part can usually run faster with better bearings and perfect balance. But the parts that move back and forth are going to always cause vibration. And the bigger that part, and the further it has to move, the more it will vibrate. So one solution to making an engine spin faster is smaller parts, but still the same amount of fuel per revolution. That can be done by scaling down every part of the engine to half the size, then putting two half size engines together. So instead of a 600 cc twin cylinder engine, you could have two 300 cc v-twins together making a 600 cc v-four. The four cylinder engine will move faster without breaking up, and so make more power.

A weak point in the internal combustion engine is the piston ring. In case you were not aware, the most difficult job in the engine is sealing the piston against the cylinder wall. That is because the piston is moving up and down quickly, and whenever the fuel ignites, it pushes against the top of the piston with great force and heat, and also tries to go around the piston. If the burning (actually a controlled explosion) fuel manages to get by the piston, it will eat away at the side of the piston and reduce it to molten slag, at which point the engine stops. Back in the nineteen thirties, engines needed to be torn down regularly to put in new piston rings. And that was just a stopgap. Several times in the life of a car, you would also need to rebore the cylinders one size bigger, put in new, bigger pistons, and also one size bigger piston rings. Even driving from Ontario to Vancouver you may want to stop in Winnipeg for a ring job. That's why not many people travelled that way by car, and when they did, they rarely came back. California is full of such people.

You probably didn't know that the piston ring has the most difficult job in the engine. That's because they last so long these days that the car will likely be crushed first before needing new piston rings. But a huge amount of engineering, and manufacturing skill has gone into solving this problem. Stuff that you will never see and never even think about while driving. I'll go into a few of them.

Engines today have shorter strokes, partly to help the rings last longer. That means the pistons don't have to go up and down as far, and their maximum speed rubbing against the cylinder wall is reduced. So is the vibration, which tends to shake them loose in their grooves.

The pistons are designed and manufactured today so that when they are cold, they are not perfectly round. But when they are running at normal speeds in the engine, they will achieve their perfect round shape and size. That is quite difficult thing to do, but having the piston fit perfectly in the cylinder helps to enormously extend the life of the rings. The rings themselves have become specialized, there are rings to scrape the oil, and other rings to hold the gas pressure. The rings to hold the gas pressure are perfectly designed so that the pressure of the gas itself helps seal the piston ring tightly against the wall. And even though these rings may not look it, they are different on the top and bottom, and must be installed right side up or they will not last.

So all these things together, and many more (such as oil technology, and cylinder wall coatings) have extended the life of the piston rings. But this depends on other advances, such as liquid cooling. If your engine is air cooled, the range of temperatures is so great that the pistons will rarely have the perfect shape, and rings will not last. Also if your pistons have a long stroke, the rings will not last. I have to mention Harley Davidson here, as they are still made with long stroke cranks and no liquid cooling. How do they survive? The simple answer is by limiting the speed and power of the engine. If Harley Davidson engineers had their way, they would of course go with liquid cooling, and a short stroke crank, and put out an engine with some serious power. They already have, it's called a Harley Davidson V-Rod, and it usually sits on the showroom floor gathering dust. On the other hand, the Kawasaki Vulcan 900, which supposedly resembles the Harley, actually has liquid cooling and a short stroke and can handily outrun a much bigger engined Harley Davidson with a traditional engine (Not the V-Rod) Not only can it outrun the Harley in the short run, but on the long haul, where the heat generated by an air-cooled engine will build up and make things worse.

I still wonder why there is so much resistance to modern engines among many motorcyclists. Even BMW owners have demanded a two cylinder engine without liquid cooling. I guess part of the reason is the mellow sound of a slow engine, and the simplicity of not having to worry about a radiator. But I worry a lot more about my piston rings melting down in stop and go traffic than I do about the radiator needing to be topped up.

Manufacturers have figured out ways to make an engine of a certain size produce reliable power, but many motorcyclists have not been able to adjust their thinking. Yes, if you could run an engine from 1935 at 10,000 rpm, it would blow up immediately. But my 1969 Honda CD175 was designed to run up to 10,000 rpm without breaking. Coincidentally, Mr. Honda who founded the company, got his start trying to make piston rings for Toyota before WW2.

This resistance to modern engineering does not happen so much with cars, where the engine is isolated from the driver, but many motorcyclists do not understand the engineering behind modern engines, and so insist that if any engine runs over 5,000 rpm it will blow up, and even if it doesn't, it sounds like it will. Years ago I used to hear about an event at Harley Davidson rallies, where they would take an old Honda and rev it until it blows. It usually wouldn't, to the great consternation of the assembled faithful. So they would remove all the oil and try again. It would keep running so long that some spectators were sobering up. So to keep the spectacle short, they would simply start shooting it or hitting it with sledge hammers. Once the ritual was over the bikers would drift away back to the wet t-shirt contests, satisfied that they had once again proven the superiority of the air cooled, slow revving engine.

Picture: I found a picture on the Internet of a person installing piston rings on a piston. You have to bend them to do it.
Copyright the Lost Motorcyclist