The Subliminal Message of The Hurt Locker 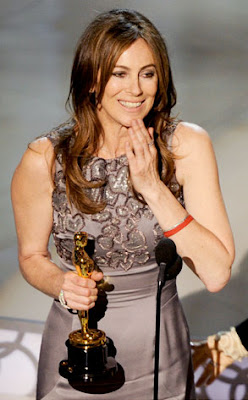 This is a spoiler alert, in case you have not seen this movie and still want to see it.

The main reason we decided to go and see "The Hurt Locker" was simply out of surprise that this movie won the Oscar for best film and best director. Mary Ann and I both wanted to get an idea why it won and Avatar lost out.

"The Hurt Locker" is shot in a documentary style, to give a realistic effect, with very shaky camera work. Luckily I got used to to the jiggling camera after a few minutes

I have read several movie critics who went after Avatar for being too simplistic. So let's judge "The Hurt Locker" by the same standard, for it's over-simplifications, and not be fooled by the shaky camera work into believing this is reality.

After watching the whole movie, I'm trying to remember even one Iraqi killed by mistake. On one hand the movie goes to great length to give the impression of gritty realism, even at one point showing a soldier taking a piss, and yet somehow misses the most tragic reality of this war and many others. It is a fact that you can't easily tell the innocent civilians from the bad guys, and sometimes you end up killing innocent civilians to save your own life. So if you're not going to bother with the ugly fact of collateral damage, then don't bother showing people pissing to make your movie look real.

How many times in the movie was it likely, and realistic, that an innocent civilian would be shot? Let's start with the first bomb (remember I said spoiler alert). The soldier spotted the guy with a cell phone and shouted that he should put the phone down. He might or might not have been trying to detonate the bomb with the phone. It turn out he was actually detonating the bomb that killed their Sargent, and he did not respond to calls to put the cell phone down. Why didn't they shoot him? I guess we are to believe that the soldiers don't shoot people unless they have proof someone is a bad guy. This one even turned out to actually be detonating the bomb, but his life was spared because they were not sure. I do not think that is realistic. Doesn't anyone listen to the news?

In the second bomb defusing episode, an innocent taxi driver ran through a road block, ignoring shouts to stop. He drove right up to the guy in the bomb suit and stopped. Still nobody shot him. The bomb guy pulled out his pistol, threatened the taxi driver with it and told him to back away. He didn't move. At this point I'm wondering if the movie is trying to make a point about the real care and affection the Americans have for the ordinary Iraqi citizen. Anyway, after a few more threats, and shooting out the windshield the driver finally got the idea that his presence was unwelcome and he backed up, and was taken into custody by the US Forces. In reality, I believe he would have been so riddled by bullets that he would never have made it past the road block, or anywhere near the bomb disposal expert.

There is even an incident illustrating the politeness of the Americans. While stuck in traffic with their Humvee, the bomb squad is yelling at the driver in front of them to move aside. When he doesn't, they throw a plastic water bottle at the car. Yes, in Toronto rush hour traffic that would provoke some road rage. But youtube is full of videos of military Humvees in Baghdad ramming cars, and even some shooting of drivers of other cars that get too close. In fact, the sign on the back of their humvee says something like stay back 200 feet or you will be shot. It doesn't say "Or we will throw a plastic water bottle at you". As someone actually says at one point in the movie "You don't need to throw a wrench, you're allowed to shoot people here".

At another tense moment an Iraqi with a camcorder is standing on a balcony filming the bomb disposal unit working on a car bomb. It's as if the camcorder guy is not afraid of being shot, and nobody shoots him, though they are seemingly worried about it.

Out in the desert the the Bomb Unit meets up with an SUV driven by a bunch of armed men, dressed as terrorists. Nobody gets shot, everybody is really calm. Then they discover that these men are "Special Forces" or maybe mercenary bounty hunters disguised as terrorists. SO they are on the same side. I think we know already of several cases of friendly fire, where people were actually killed in situations far less alarming than the meeting portrayed in this film. But again it is simply taken for granted that no "friendlies" are ever shot and killed. What else would you expect in a war where not even innocent Iraqis are shot and killed.

The last sequence of the movie, an Iraqi man has bombs strapped to him, and is pleading for help in removing them. I wonder if the bomb disposal specialist would really would go over and try to defuse that bomb. Anyway, he does, putting his own life in jeopardy to save an anonymous Iraqi man in who has been booby trapped with a bomb. Even when he sees the bomb has a timer and only 2 minutes left, and there are several case-hardened padlocks that need to be removed, he keeps working to the last possible moment, then apologises profusely, and runs for cover. Too late, as he is hurt by the explosion, but not critically.

I almost forgot to mention the obligatory stereotypical liberal, the psychiatrist who is made to look an absolute fool in the movie. I'm fairly sure this character is thrown in for no other reason than to give a thrill to the Rush Limbaugh and and Mark Steyn fans.

This movie is full of situations that make you think the American occupation forces would never harm innocent Iraqi people, making you think they would never shoot Iraqis just in case they might be a threat. I believe this runs counter to everything I have seen about the Iraq war or the Afghan war or the Vietnam war. If the occupation forces could treat the local people with such care, winning the war would be inevitable. But the reality is that in these insurgencies, the terrorists or freedom fighters, or whatever you want to call them, can use the civilians as cover. That's what makes the guerrilla wars difficult, and unless people understand that, they will remain confused about why the war turns out badly. Without the basic understanding, invasions will continue, always with the hope that they will win the next one.

There were plenty of other situations that stretched the imagination, but I would not count as outright propaganda. For example, putting out a car fire with one extinguisher. (and it's a car bomb at that). I don't want to go heavily into weapons and equipment capability, I'll leave that to people who have experience, but I suspect that some of the usual stretching of the truth takes place.