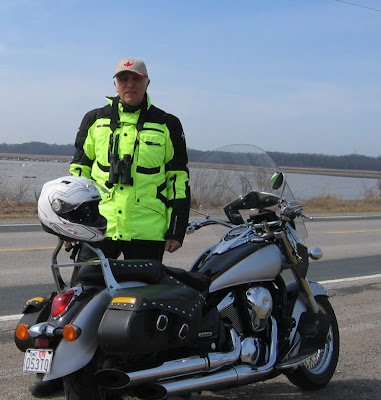 I have just completed a three-lake ride. With all the nice weather, I couldn't just drive back and forth to Port Dover every day, I needed to use my imagination for once. I hit on the idea of visiting three lakes in three days. Kitchener is perfectly situated for such a ride, being in the middle between Lake Ontario, Lake Erie and Lake Huron. Lake Erie is obviously done, that's where Port Dover is Located. Toronto, where I went yesterday is on Lake Ontario. Today, Mary Ann and I went to Lake Huron. She included a couple of extra stops, one to visit her sister, and one to see the migration of the Tundra Swans before they disappear. They always visit the same field between Port Franks and Grand Bend every year. Earlier this week there were 15,000 of them, but today there were probably no more than 2 thousand at best.

By the time we got to Grand Bend, we were starving, so we went down main street looking for a restaurant. I forgot: the restaurants close in the winter. No, actually I knew that. What I really forgot is that it is still winter! We stopped to discuss the dilemma, and decided to head north to a restaurant appropriately called "I'm Starving" where they were advertising the Friday special halibut dinner. "Stop just for the halibut." This is the type of restaurant that both of us like. You might consider the funny signs posted all over as character, such as "Children left unattended will be served espresso and given a free kitten." But that's not where the real character is found. No, it's in the quirky little things that make no sense. Like the fact that the Friday special costs two dollars more than the every other day of the week menu. Or that the men's bathroom stall and urinal cannot be used at the same time because the door only misses the urinal by about an inch. We were talking to a local couple in the parking lot about our bikes, and I must have looked very rich in my "High Visibility" jacket because they offered to sell me their house for half a million. Mary Ann said "We already have a house." Did I mention she is Dutch? After they went inside, she said to me "Exactly how much did you pay for that jacket?". 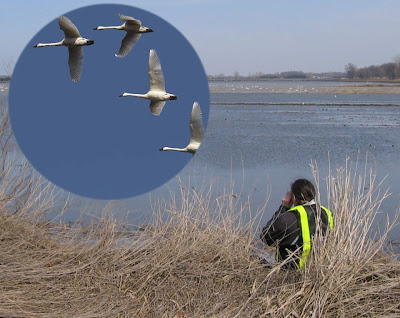 Then we were off to get some gas and visit the Swans. There were quite a few cars stopped on Greenway Road looking at the distant white dots in the field. We decided to make ourselves comfortable, so we lay down on a grass covered embankment and used our binoculars to watch them fly overhead. Some of them are on the south side of the road, and some are on the north and every few minutes a group of northerners decides to visit the south and vice versa. So a lot of swans are flying overhead.

After about half an hour we were ready to visit Mary Ann's sister, but before that we needed an afternoon coffee in Lucan. The Timmy's in Lucan unfortunately mixed up our order, and it was impossible to tell which was decaf and which was real coffee. So instead of pitching them out and ordering another two, we simply took a chance. By midnight tonight I should be pretty sure which one I got. And then, to make up for the whole fiasco, we won a free coffee on the roll up the rim. Apparently there are 30,000,000 winners a year in the annual three week contest. And by my rough calculation, probably 150,000,000 losers. Meaning altogether 180 million used cups hit the landfill in three weeks. This information did not please Mary Ann, who is a conservationist, among other things.

We finally started for home about 5:00, to get home before the sun goes down and temperatures drop. After a while I noticed that I forgot to close my saddlebag, so I pulled over on a side road and snapped the lid down. But for Mary Ann this was the perfect opportunity to suggest we explore this road, so off we went. It was actually a good short cut, but it was mostly gravel which we travelled at about 70 kph. Mary Ann explained later that when it gets loose, you just let the bike steer itself when it gets wobbly. I suppose that is good advice, except that every once in a while you might get thrown off regardless. At least we had a lot of heavy clothing on, and the road was hard packed for most of the way.
Copyright the Lost Motorcyclist