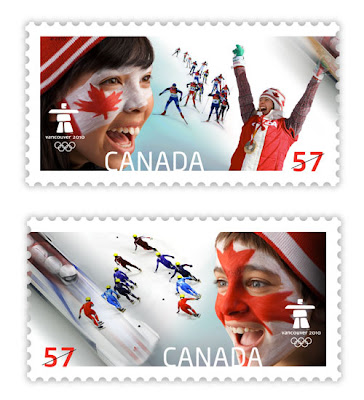 Last night, watching the closing ceremonies, I noticed that many Canadian symbols were showcased, possibly even caricatured. Canoes, moose antlers, mounties, giant beavers all abounded. But two of the most traditional symbols were also there, the Canadian flag, and the national anthem.

However, at one point during the ceremonies, two alternate Canadian anthems were played, bringing back memories of what Canada used to be not so long ago and comparing it to what it has become today.

First was the "Polovetsian Dances" played as part of the Russian intro. (here is one from youtube, but not the one they did in the olympics)

I said to Mary Ann "Did you know this music is called the "Polovetsian Dances"? She said "If you can be believed." The reason I know it is because it was once the national anthem of English Quebecers. (actually more tongue in cheek, as it was also the music for the song "Stranger in Paradise"). Not too long after, Michael Buble came on stage singing a new version of "The Maple Leaf Forever". I said "Did you know that this song, with different lyrics was in contention to be Canada's national anthem?". Mary Ann said "Why don't you just send me the link sometime and let me watch the ceremonies now."

Not so long ago, we neither had the red Canadian flag nor a Canadian national anthem. In 1965, after a storm of controversy, the new Canadian flag was first raised over Canada. And we didn't have an official national anthem until 1980. Actually, we had two anthems, which is about the same as having none. "O Canada" was favoured by the French Canadians and had broad support across Canada. But "The Maple Leaf Forever" was preferred by the die hard British loyalists, who blocked the official adoption of "O Canada" until 1980. Although the actual tune of Maple Leaf forever was OK, those who loved the song never really understood what was wrong with the words to it, and as a recent comment on the internet explains "What isn't politically incorrect these days"?

So to set your minds at ease, here are the original lyrics of "The Maple Leaf Forever", and the tune is on youtube here.

In days of yore, from Britain's shore,

Wolfe, the dauntless hero, came
And planted firm Britannia's flag
On Canada's fair domain.
Here may it wave, our boast and pride
And, joined in love together,
The thistle, shamrock, rose entwine
The Maple Leaf forever!

As for what's wrong with it, as they say in the Jeep world, if I need to explain, you wouldn't understand.

If you watched the "Maple Leaf Forever" video, you also got a peek at Canada's old flag. It says "used until 1922", so by 1964 it was way past its "Best before" date . There was a nationwide flag designing contest, and several designs were put forward over the objections of the die hard (why is it they always have to die hard?) patriots who would hang on to the old flag until it was pried from their cold dead fingers. After all, they had fought for that flag in two world wars. 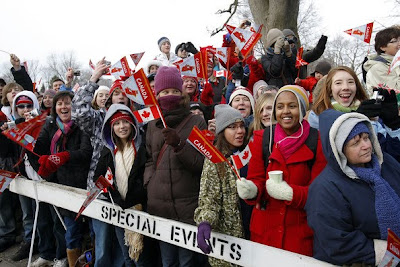 The new Canadian flag was actually a surprise to everyone. Although the general layout was popular, some people wanted the side bars to be blue, to represent the two oceans, and have three leaves, not one (not sure why though). And there was some concern that a red leaf meant it was going to fall off soon and winter was coming, so there were people who preferred green leaves. Check out the "Pearson Pennant" and see if you think it looks better than the actual flag that was chosen. The Pearson Pennant was the front runner until almost the last minute.

The choice of the simpler colour scheme and single maple leaf was an artistic one, putting aside the militaristic "red white and blue" in favour of a more peaceful colour scheme reminiscent of the neutral Swiss cross or the inverse "Red Cross". Howls of protest were raised that the new Canadian flag, from a distance, if you squinted, resembled Peru's flag. Quebec has a blue provincial flag that competes fiercely with the red Canadian Maple leaf inside Quebec. Most Canadians are unaware of this flag battle still going on in Quebec. But even during the Quebec section of the Olympic torch relay I saw a good number of Canadian flags, so maybe its a sign of the new times.

In 1965 the new Canadian flag went up for the first time, and now we have had 45 years to get used to it. The simplicity of the flag has lent itself to many imaginative and original applications that enhance the symbol's value.

The two most basic Canadian symbols the flag and the anthem are kind of recent. But they suit the new image of an independent, multicultural Canada so much better than the divisive and exclusive British empire colonial symbols. It's a new image, and a renewed country that pulls together the best of the new and the old. And hopefully leaves behind some of the old animosities that dragged on for way too long, honestly.
Copyright the Lost Motorcyclist