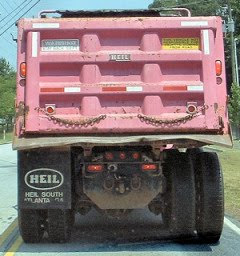 I went for another motorcycle ride today, the warmest day so far. It was 14c when I left home. I turned back at New Hamburg, and took Bleams road back to Kitchener. In New Hamburg I saw a rare sight, a dump truck painted all pink. The driver was a man, I did check.

One thing that prompted the trip was this feeling that I should enjoy life as much as possible before I die. I always get that feeling after my regular checkup with my doctor, which I had at 2:30 PM today. This time there was nothing wrong with me, although the doctor did suggest eating more fruits, fiber and vegetables and fewer Tim Hortons donuts. Otherwise my probability of having a stroke is 13%, I did not inquire further about this alarming statistic. So today I ordered a raisin bran muffin as a compromise. And a large decaf. I don't usually order large, but with my last coffee, I won a free large coffee, and I had to cash in my winnings.

On the way home, I was stopping for a traffic light, and as I came to a stop, the car to my left suddenly accelerated and went through the light just as it turned red. It was a new Toyota Camry, what a coincidence. But I highly doubt that this was a case of UNintended acceleration. I might even call that "INtended acceleration". Why is it that Toyota drivers think they can get away with this stuff just because the newspapers and TV are filled with stories about unintended acceleration? I wonder if I was driving my Toyota, and I went through a red traffic light, and then either got stopped by the police, or had an accident, would I have the nerve to blame it on "Sudden Unintended Acceleration"? I don't think so.

While I'm on the subject of unintended acceleration, I am really surprised that there is still a debate about whether brakes are stronger than the engine. Some people think the engine is stronger than the brakes, some people think the engine is stronger in the short run, but brakes are stronger in the long run. Some people believe that to stop a car, you need assistance from the engine, which provides some drag when your foot is OFF the throttle. And another weirdness, some people think that all car brakes are "Hydraulically assisted". I think what they mean is that the brakes are "Hydraulically actuated" which is a totally different thing. Assisting means adding some force to the braking pedal, as in "power brakes". Actuated means transmitting the force of your foot directly to the brake hydraulically.

It is shocking how much ignorance is out there about car driving. But there are people reading while driving, which is about a hundred times dumber than not knowing the physics how brakes work.

So once again, I come to the rescue of Toyota. With dry pavement, the stopping distance of a car from 60 mph is 150 feet. I'm working in the old non metric system, since apparently in almost all cases of unintended acceleration, the driver only seems to understand feet and inches. The accelerating distance of a car, from 0 to 60 mph is 370 feet. The stopping is done mostly by the brakes, the acceleration is done by the motor. And the shorter the distance, the more power, whether it is braking 60-0 or accelerating 0-60. Now obviously, acceleration varies enormously, from an overloaded Toyota Yaris (longer distance) to a Turbo Porsche (shorter distance). So that gives you room to dispute the fact that according to distance alone, the brakes are twice as powerful as the engine. However in all cases, acceleration is limited by the power of the motor. But the brakes are limited by the traction of the tires. That's right, in order to be as powerful as the brakes, you would need a car with four wheel drive that is also capable of smoking all the tires from zero up to sixty mph. A car with enough engine power to spin even one tire, leaving a black streak on the road is rare. But to lay down four strips of rubber for 150 feet is likely going to require over 1500 hp. I have never seen a car that could do it. But the majority of cars can lay down a four wheel skid mark from 60 mph to zero.

And now for the long term. The engine can continue to put out that power until the gas tank runs dry, about 400 km. The brakes can continue to absorb that power for only about 1 km. until they burst into flames. Which means, if the engine takes off on its own, get that car stopped using the brakes in less than 1 km. If not, the other 399 km could get exciting.

Picture: Pink dump truck I got off the internet. I didn't have my camera with me to snap the pink truck I saw, and why bother when I can find a picture of anything imaginable on the internet?
Copyright the Lost Motorcyclist