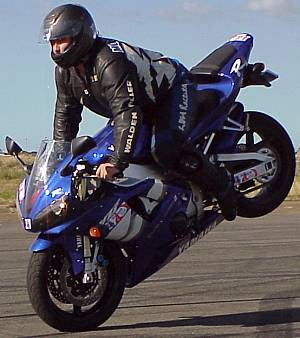 That introduces the subject of this entry, which is brakes. Until the Toyota runaway acceleration problem, I had no idea how many people did not understand the concept of brakes on a motor vehicle. When I was young, brakes failed so often that everybody knew how they worked. I guess when stuff fails, that's when you really find out how it works.

My first accident on my Honda CD175 was caused by brake failure. (Of course it could not have been driver error, because I was driving). I had gone down to the bar to pick up a "case of 24" (translation for non Canadians: beer) and had it strapped to the back seat. As I was heading home, and naturally this had to be right in front of the school, a goat jumped out in the road right in front of me, I hit the brakes. The front wheel locked up in the gravel and I went down. The damages were 5 broken bottles, and some road rash on my knees. My hands were OK because they were wrapped around the case of beer to protect it, or even more bottles would have broken. Several of my students witnesses the horrific crash and came over to help. Later on I discovered that the back brake was not working, so all the braking force was on the front, and that's why it skidded unexpectedly.

The Honda CD175's front brake was the now-obsolete cable operated drum with a single leading shoe. The rear was the same, but a little smaller and rod operated. As I tried to fix my rear brakes, I discovered this interesting fact. If you wash brake shoes in kerosene, they will be totally useless. But over the years I had that bike, and my next one, I did discover how to make those drum brakes work reasonably well. The most important thing to remember is lubrication. Some places need lubrication, and some cannot function if there is any lubrication at all. And in some places the "must lubricate" bits are alarmingly close to the "No lubricate" bits. Brake shoes, by the way, are "no lubricate" bits. And in case you have not guessed, kerosene is a lubricant. So is water.

Back in 2002, I was at the motorcycle rally in Sturgis South Dakota on my BMW, and I spotted an old guy pull into the campsite riding a Honda CB160, the precursor to my CD175. This immediately got my attention, and I went over to speak to him. I told him I had a CD175, and he said "You must mean the CB175", because that was by far the most popular of the two in the USA. No, I replied, I mean the CD with one carburetor. At that point, we seemed to connect, and next thing I knew he offered me his CB160 to go for a ride up the mountain road right next to the campsite, which I accepted. I reached the top with no sweat, and turned to go back, but at the first hairpin turn, I realized: "NO BRAKES". I manged to make it all the way back down, which was really not too scary once you are aware that you actually have no brakes. When I handed him back the bike, I thanked him and told him what a great ride it was, and casually mentioned that there were no brakes, which seemed odd since he had ridden the bike here from Salt Lake City, a good 500 miles. His response was "I thought you would have known. None of those bikes have any brakes". And I guess he should know because he had over 50 old vintage bikes. So it really was tricky to make those brakes work properly.

But apparently not everybody is an amateur mechanic like myself, and many people do not understand the basic principles of how a brake works, or even how to spell it. So here it is in course I call Brakes 101.

A brake uses friction to convert the vehicle's forward motion to heat. A car that is moving forward at speed has a lot of energy, and something must be done to that energy if you want the car to stop. This is because of a law of physics we call "The Law of Conservation of Energy". In other words, there is no device that can either create energy out of nothing, or make energy disappear into nothing. An engine makes forward motion energy from the energy stored in gasoline. The brakes removed forward motion energy by turning it into heat energy. It would be real nice if brakes could turn forward motion energy into gasoline energy, but that's not how it works yet. Although Toyota's hybrids are kind of working on that principle, using battery energy.

Hopefully this point is well understood, because it may save your life one day.

Brakes are designed to absorb a certain amount of motion energy as heat, and as they work they heat up, and their temperature rises. They are usually designed so that they can stop a car from top speed without getting too hot. And they can do that on a hot day, with the car loaded down with passengers, and going down hill. And they can repeat the entire test back to back a couple of times. But when they get too hot, eventually they will stop working. Usually the first thing to go is the brake fluid, which is a type of oil that is designed to transmit your foot pedal pressure to the brake pads that squeeze the rotating disk. Once this oil evaporates, or burns up, your brakes stop working. Or if the brake friction pads burst into flames, your brakes will suffer serious damage. Or if any metal thing melts down or lets go under pressure. You have to understand that the brakes will still work even when they are really hot, but there are ways to get them too hot and then, by definition, they will fail.

Now how can they get too hot? Say you are at the top of a 20 mile downhill run, pulling a big trailer. And you decide to hold the speed of the car with the brakes alone, in neutral, not using the engine. You may be OK for a mile or two, but you will smell burning at some point. Then your brakes are getting close to their limit.

Another way to make them fail, is to push the throttle all the way down at 60 mph, but hold your speed steady using the brakes. That would be worse than a 20 mile downhill run, especially with a powerful engine.

Now here is a strange part. If your car is standing still, and you apply the brakes really hard, the engine will not be able to get the car moving. Even with an automatic transmission in drive, you can keep your foot to the floor on the accelerator, and the brakes will not even begin to warm up. But your transmission will. That's because as the brakes are stopped, they are not creating friction or heat. But the energy from the engine has to go somewhere, and the only place to go is the transmission. Pretty soon your transmission will blow up. So that's a little tip for you people who want to do that type of thing just to see what blows up first.

If your car suddenly goes to full throttle and you can't control the engine, you can use the brakes to stop the car. But remember you only have a certain amount of time. The longer you drag the brakes before you pull off the road and stop, the more energy the brakes are absorbing, and some time soon they will reach the limit. Get stopped quickly or flames will be coming from the wheels, and your brakes will be totally useless, with the engine still pulling hard. Once that happens, you better know how to shut off the engine or how to put it in neutral or you could be the next victim of unintended acceleration. My advice is to point the car at some bushes or hedges or maybe a corn field. Not over a cliff or into a telephone pole. If you can get the car to roll over gently in the corn field by pulling a U-Turn as it slows down, you will stop, because the driving wheels will be spinning uselessly in the air. It's another way to put the car in neutral if you can't figure out how to use that stick between the front seats.

And another safety tip: Do not drive along with your foot always on the brake.  First, the rear bake light will be on all the time, meaning it is not signaling any useful information.  Secondly you are pre-heating your brakes, and now you understand why that is NOT good.  Try to not use the brakes unless you need them. And when you do need them, get on the brakes quickly and knock off some speed as soon as possible.  That's how brakes are most effective.

Picture: This is called a "Stoppie" as opposed to a "Wheelie". It is a stunt that uses the front brake to lift the rear of a moving motorcycle off the ground. Brakes did not do this back in the sixties.  Do I really need to add that this stunt is dangerous?
Copyright the Lost Motorcyclist