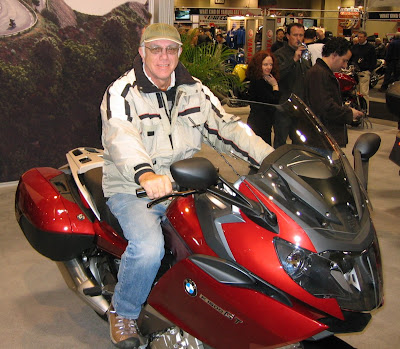 Finally, the Toronto Motorcycle Show. Or should I say the other Motorcycle show because there are two of them. This one is downtown at the Convention Centre, and all the major motorcycle and moped manufacturers try to attend. The two bikes I wanted to see were first the BMW K1600GT and the Honda CBR250R sport bike.

I was not disappointed, the BMW K1600GT is the bike in the picture with me sitting on it wearing my best fake smile. I got there early and not too many people were around the bike, although I still had to photoshop one onlooker out of the picture. Later on, the bike was simply surrounded by onlookers. The K1600GT was locked in a vertical stand, so I couldn't feel the weight, and there was really not much to see other than the engine's width, which is easier to judge in real life. The price tag on this bike was $24,100. I'm sure that is on the low side of what most people were expecting, but I don't have the breakdown of what options that includes. I didn't talk to the people at the booth, which I should have done, about what is included in the price. According to this website, the price does not include Bluetooth, adaptive headlight system, dynamic traction control, electronically adjustable suspension, central locking system, tire pressure monitor, alarm, and modular GPS, trunk, or stereo

I also stopped at an Ontario Provincial Police booth, and asked about the stunt laws, especially "Sitting on the drivers seat while riding". The officer thought that it would be very surprising if a fellow officer were to confiscate my bike for stunt driving merely because I was lifting my rear end off the seat for railroad tracks, or even to stretch my legs. However, if he was following me, and I was standing up all the time, after 14 km or so he may just pull me over out of curiosity, and probably to advise me to sit down. I guess I could understand that. 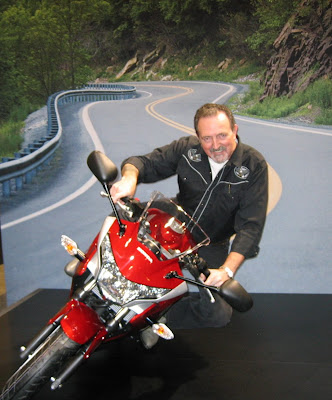 The Honda booth as expected, had the new CBR250R, with a price tag of $5000 including ABS, and about $500 less without ABS. It was mounted on a tilting platform, in front of a screen with a twisting road. So if I was smart I could have gotten a really impressive picture of me leaning into a curve. Unfortunately when Bob took the picture with my camera, the flash didn't go off. So I'm using the picture I took of him in my blog. Yes, I know he's not wearing a helmet. He's also not moving.

Another bike I was interested in was the Suzuki TU250, a retro-style standard 250 single. Price was not known by the people at the Suzuki booth. It looks like finally we are starting to get some smaller non-cruiser motorcycles, that are still capable of freeway riding. (just)

Another good booth was about Wawa, Ontario, where I picked up a free map of Algoma Country. Free maps and stickers are my favourite things to collect. I also got some stickers, including a "Lucas Oil Products" sticker that I had never heard of before. I always thought they made electrical products such as headlight switches that have three positions: dim, off, and flicker. I had heard of Amsoil before, and got one of their stickers too. Although when I visited their booth I was too speechless in the presence of the Amsoil girl to ask for one, but debonair Bob (i.e. not me) picked up one for me later to complete the collection.
Copyright the Lost Motorcyclist