A Commentary on the Movie "Hard Ride to Hell" 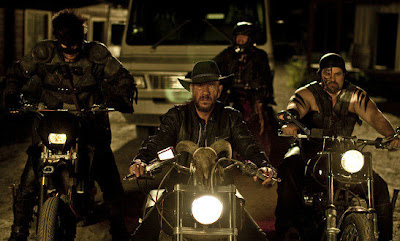 This is not a review of this movie, and furthermore it may contain spoilers. Instead this is a commentary. The difference between a commentary and a review, is that in a review the reader is given opinions on the movie in order to decide whether to see it or not. My commentary is more about whether movies like this are harmful to motorcyclists image, instead of why you might want to or not want to see it. (although there are a ton of reasons why you might not want to see it.) So here goes.

If you just happen to randomly flick across this movie as you change channels, you might think it was a biker movie from the sixties. It has ugly violent bikers terrorizing honest decent citizens, just like in the old days. But this movie was made in 2010! I thought we had put all that stuff behind us. Way, way, behind us. Up till yesterday, my only complaint about biker shows, was about the T.V. series on bikers "Sons of Anarchy", which I think is a throwback, although to be fair, it is far more sympathetic to the bikers than the old biker gang movies.

The title of this movie is "Hard Ride to Hell", which is redundant, as I doubt if there has ever been a ride to Hell that was easy. At first glance is just like the sixties biker gang movies. Crazed ugly bikers terrorizing innocent civilians. And laughing as they do it! Is there ever a lot of crazed laughing from the bikers as they chase their victims and beat them up, and do other even more nasty stuff to them.

As I watched the movie more closely I noticed we motorcyclists actually were catching a break. Because these monsters were not human bikers. They were a group of immortal vampire-like demons that cannot be killed except by luring them into a church and hitting them with a crucifix of Jesus. OK So now it makes perfect sense why they are not wearing DOT approved helmets while riding their bikes.

And several other things start to make sense too. Like why the gang leader is riding a Harley Davidson whose only custom accessory is a pair of goat horns bungeed carefully to the handlebars. Why most of the other motorcycles in the gang are lightweight dirt bikes. How the gang leader manages to keep his wide brimmed hat from flying off while riding down the road. (It's not a chin strap, it's black magic, which is much, much cooler. Or maybe glue.)

The innocents in this flick are a group of people travelling by motorhome, to volunteer at a Habitat for Humanity construction site. They are nice, easygoing people. No wonder their women are not interested in the Gang Leader's offer to bear his spawn of Satan. Incidentally, that is the basic plot right there. The Gang leader must somehow find a woman to give birth to his spawn, who will be the next AntiChrist. 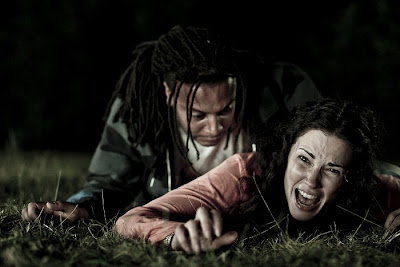 It takes quite a while for the innocent people to figure out that they can't kill these immortal demons. No matter what they do, it just pisses the biker/vampires off even more. Until the good guys stumble across an old church, where the priest has an amulet that will stop the bikers in their tracks, plus as they say "It's good to have Jesus on your side."

There is an interesting comment on one of the reviews I read (yes I read reviews, in order to know about the parts I missed). The comment is "why don't they use their cell phone?" That is a fair comment. I guess back in the sixties, they didn't have cell phones, and this plot is lifted directly from the sixties. (*minus the vampire angle). But in the movie, they do try to explain that there is no cell phone coverage in that area. OK I can accept that, even though the reviewer is doubtful.

I will make one other comment, in case you like movies without a lot of swearwords. I'd have to say that these vampires, for all the raping, amputations, and cannibalism they exhibit, there is hardly any bad language.

Here is a link to a review http://www.thesickshouse.com/2010/06/mad-max-meets-exorcist.html
Copyright the Lost Motorcyclist