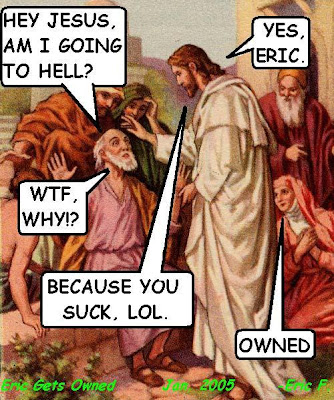 I disagree with the concept of Jesus dying for my sins. I am OK with it as a minor plot, but the Evangelicals make this issue central to their entire belief, and taken to extremes, it makes no sense at all.

I always believed that Christianity is all about trying be a good person. But I have been told that Evangelicals believe that it is not important to be a good person, but only accept that Jesus died for your sins. (Which when you think about it is actually a heck of a lot easier than my belief.) According to Evangelicals, once you have accepted Jesus, no matter what you do, it will be right and good. Even if it isn't really, and that's where the argument starts.

Yes it is very moving when someone makes a sacrifice for you. That's why it is a good story. But when you make this story the centre of your Christian faith, it no longer makes sense, and worse yet, it pushes out the true message of Christianity "Do unto others as they would do unto you."

How does this sacrifice stop making sense when you take it too literally?

To properly understand the concept of sacrifice, I am going to invent a fictional situation, where someone tried to shoot me, and my friend Bruce jumped in front of me, and was hit by the bullet, and died. Of course, this is all make believe, but I want to use this to illustrate a normal sacrifice. When Bruce sacrificed himself to save me, I was actually in danger. The danger was not caused by Bruce, either. Bruce really did put himself at risk and died trying to save me. And I really was saved, and lived happily ever after, and I was properly grateful for what he did.

Now let's look at the assertion that Jesus sacrificed himself to save me. How is Jesus' sacrifice different from Bruce's sacrifice?

Why was I bound for hell in the first place? According to the Born Again Christians, I am going to hell because Eve ate the apple of the tree of Knowledge, and after that crime, God has declared all her descendants to be evil. Furthermore, it does not matter if I am actually good, I'm going to hell anyway, unless Jesus sacrifices Himself to save all mankind, including the people who actually tortured and  killed him.

Unlike Jesus, Bruce had documentation to show he existed. A real sacrifice normally involves a real person, but in Jesus' case, he lived 2 thousand years ago, and even then, there is no solid evidence that he existed.

Bruce's sacrifice is a genuine example of Jesus's actual message  "do unto others as you would have them do unto you". It seems to me that Jesus's sacrifice is more like blackmail, according to the Evangelical interpretation.

Bruce's sacrifice was real in another sense. Bruce really did die. He did did not come back to life. Jesus only pretended to die, but came back to life, meaning Jesus was a tad inconvenienced, that is all.

So the actual expression would be more like: "Jesus was a tad inconvenienced to try to scare me with a threat of hellfire." And apparently I should show my gratefulness for this mercy by becoming an Evangelical.
Jesus' message was "Do unto others as you would have them do unto you.", and it is the very opposite of the message we get from Evangelical fundamentalists like the wealthy  Pat Robertson and Jack Van Impe on TV.  They tell us  You are all evil because God made mankind that way, and Jesus died to save you from your sins."
The Evangelical interpretation of Christianity is inconsistent with the message Jesus gave us. If God was following his own golden rule, he would not create an evil mankind that needed to be saved. There are other ways to interpret the Bible that make far more sense.
Picture: The Evangelical version of the bible with modern day wording, from this blog:
http://www.atheistapologist.com/2010/06/abridged-reworded-story-of-jesus_04.html
Copyright the Lost Motorcyclist