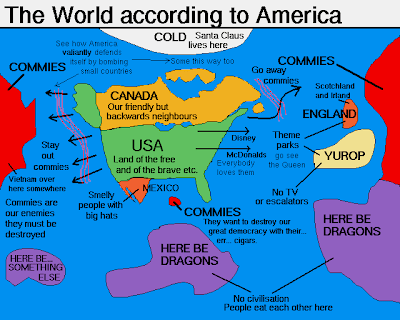 Recent releases of classified memos indicate that American diplomats are wary of "Anti-Americanism" in Canada, citing popular Canadian TV shows that portray Americans in a negative light. And they suggest that something should be done to try and counteract this negative stereotyping on Canadian TV.

I have not watched all of these shows, but I know what they are talking about because on the shows and movies I do watch, I have seen situations where Americans are threatening Canadian sovereignty. For example "Canadian Bacon", a comedy where some Americans attempt an invasion of Canada, and "Phil the Alien" featuring unknown American undercover agents searching for aliens in Canada.

So yes, of course, this type of "anti-American" fiction is on Canadian TV all the time. Sometimes we think it's funny. Sometimes we don't even watch the show. But rarely does anything in our fiction ever approach the very real events, news items, and American TV shows that assail us almost daily. And whatever our fiction is, usually is a subdued imitation of the real thing, not a hype-up melodrama just to make us crazy.

For example, recently, Mark Emery, a well known Canadian businessman was extradited to the US to go to jail for selling marijuana seeds to Americans over the Internet. So if a similar situation appears in a Canadian fictional TV show, it's not too surprising is it? You know how to stop that from happening. Don't send agents over here to arrest Canadians and drag them back to the USA.

What else has gone on? An innocent Canadian arrested and taken off a plane in New York, sent to Syria for a year's worth of torture. Does that make Canadians feel good when they cross the border and are treated with rudeness by the border guards?

How about Janet Napolitano, US Secretary of Homeland Security, saying


"One of the things that we need to be sensitive to is the very real feelings among southern border states and in Mexico that if things are being done on the Mexican border, they should also be done on the Canadian border."


When asked if she was referring to the 9/11 perpetrators, Napolitano answered:


"Not just those but others as well."

Canadians know that none of the 9/11 terrorists got into the USA through Canada. So why doesn't the Secretary of Homeland Security in the USA know that? Is it possible that it is the American diplomats and officials who need to be exposed to some reality, and not the Canadians?

Americans who think it is OK to arrest and torture Canadians as long as our Conservative government agrees with it, will get another shock. Many Canadians suspect that our well-funded Conservative party is in power only because of American influence. They were elected by less than 35% of the vote, and have received funding, directly or indirectly from American conservative interests. (I am referring to both Evangelical Christians and oil companies and maybe some others.)

Not only is our minority government pro-USA, but it regularly breaks with Canadian Parliamentary tradition to keep in power. It has already suspended parliament to avoid being ousted by a motion of no confidence, and has used the Canadian senate to block legislation that was passed by our parliament. If this is all too confusing, let's just say that a right wing pro-USA party seems to be rolling in money, and uses all the dirty tricks it can to stay in power, and block popular Canadian legislation, despite an overwhelming number of Canadians voting for left-leaning parties. Does that sound like democracy, or does it sound like Canadians have a puppet government?

Here is my suggestion for American diplomats and officials. First, don't assume that Americans are right and Canadians are wrong. This has nothing to do with our supposed "Inferiority complex". Canadians don't actually need to be brainwashed into your set of beliefs. Let the American officials and public get a broader education, (including learning about evolution) and get more in line with liberal Canadian attitudes, and probably not just America, but the whole world would be better off.