Is Violent Rhetoric to Blame for Arizona Shooting? 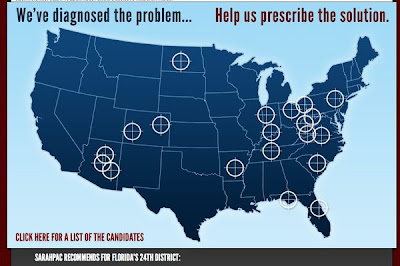 "Sarah Palin has the crosshairs of a gun sight over our district and when people do that, they’ve gotta realize there are consequences to that action." said Gabrielle Giffords, after windows were smashed in her Arizona office a year ago.

Offices throughout America have been targeted by opponents of the bill. Rep. Gabrielle Giffords is one of the many victims of these acts, whose office in Tucson, AZ was attacked by vandals hours after she voted in favor of the bill. The front door and a window were smashed apparently in response to her actions.

The source of the attacks can be traced back to Mike Vanderboegh of Pinson, Alabama, a former leader of the Alabama Constitutional Militia who put out a call for modern “Sons of Liberty” to break the windows of Democratic Party offices. “We can break their windows,” he said. “Break them NOW. And if we do a proper job, if we break the windows of hundreds, thousands, of Democrat party headquarters across this country, we might just wake up enough of them to make defending ourselves at the muzzle of a rifle unnecessary.”

Here is a discussion from July 26, 2009 about right wing political violence.

* Right wing extremist drives 50 miles to Arkansas State Democratic Headquarters prentends to want to volunteer...murders Chairman in his office. A man he has never met.


We probably havent seen the last of these. The right wing spin machine is ramping up the rhetoric....... Obama wants to throw the elderly into hospice "death camps"........ He wants to take your private insurance away........ Democrats are "Communists" and "Totalitarians"......Democrats support murder of babies..

There were 188 comments in response, and I picked through some of the right wing responses to get a sense of what the right wing extremists were thinking back in July 2009.

Padcrasher's Response:
... and your point is? ... can't stand the truth - fix it! You think those are the last attacks? guess what - people are getting REAL sick and tired of the lunacy of the left and it's got to get fixed or things may get worse.

KSigMason's Response
We could get in a pissing match over the various politically motivated killings, but I don't have all that time. Both sides of the political aisle have killed and caused problems

(Cannot see original post)
ike the Democrat supporters in the inner city who steal guns and kill innocent people who just want to rest on their porches - you two faced HYPOCRITE! All this crap and I never hear you cry about THOSE innocent people who are being killed - what does your agenda REALLY care about?? Let me say it for you "MORAL VALUES" the same one which could save lives from stuff like HIV and and inner city turmoil - which your side has done NOTHING to improve!

TheBasicsAbout's response
It has been a proven fact that American Communists and American Socialists have voted for the Democrats ...


Never Left's 2nd Response
Well, liberals are arogent agents of the state, nothing more. Leftists are completely without the ability to and imagination to do what is right. Their huberous is so deep and so out of touch with reality that they believe that their leftist ideology will be accepted by us real Americans. I see a ground swell coming, not of violence as these have done, but of prudent and thoughtful action in recognition of the lefts assault on our freedom and liberty.

TheBasicsAbout's response
I hope you are right ... but just in case ... the fire arms I own are close enough so to be loaded before anyone gets past my front door.
In this day and age - people need to understand the potential extremes of their actions
and know that more and more people are sick and tired of it
when they think they have totally won - they will QUICKLY loose in a horrific manor - because it WILL hit the fan!

Gabrielle Giffords was shot in the head this morning. Sarah Palin put a bullseye on her head just a few months ago.

Toby's Response
Well according to the Huffington post he posted that among his favorite books was the Communist Manefesto. So making him out to be a right wing nut wont help your cause

Toby's 2nd response
I love it when the left tries to make out a gunman as a right wing nut when theyre influenced by the likes of Karl Marx.

Crimson Mask
I'm far more scared of unhinged lefties. They are more likely to engage in violence. Take the Black Panthers as example. And does anyone think Charles Manson and his hippie cult were conservatives?

Responses then veered off into the usual "Was Hitler Right Wing or Left Wing" variety, and I stopped looking through them. I don't see much change from 2009.

I agree with many who think it's a waste of time to try and identify a deranged killer as left wing or right wing. But still, right wing rhetoric is far more extreme, and fear based, and laced with veiled references to guns, than left wing rhetoric.

Propaganda does not work by direct mind control. It works by making a large number of people fearful and angry, then directing that fear, hate and anger against one political group. Mob mentality and individual lunacy have their way. The Democrats are not using that type of rhetoric these days, although they did back in the days of the Vietnam war and conscription. The result today is that you do not have rampages against Republicans, they all appear to be against Democrats or liberals.

I would like to see the right wing rhetoric stepped down several notches. I think it would result in less senseless killing of Democrats and liberals. This softening of rhetoric would apply to both sides, even though no Republicans or conservatives seem to be targeted by gun-toting wackos.

Right wing followers still think "toning down the rhetoric" means surrender to the socialists. But Sarah Palin immediately took down her crosshairs website. This might be the best apology we will see.
Copyright the Lost Motorcyclist