"The Legend of the Seeker" to the Rescue for WInter Blahs 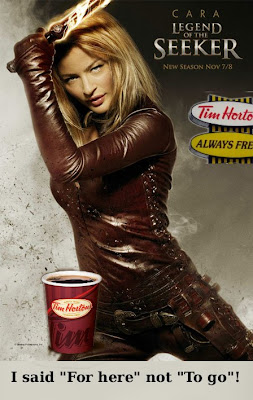 January will probably be my second month in a row with no motorcycle ride. Things are looking pretty bleak, so it's a good thing I've been able to find some Youtube videos to watch. One series that has been entertaining is "The Legend of the Seeker", which has about 40 hours of fantasy adventure episodes, from the producers of on old favourite "Xena". The show was cancelled a few years ago after two seasons, but I have not seen any of it until now. Usually I don't like these fantasy "Lord of the Rings" type shows, but this one has plenty of leather clad women, some humour, and the sword fight scenes are easily skipped over, and the magic rules are reasonably simple and sort of consistent. Actually, that was my major objection to wizard shows, in that the magic rules changed at the whim of the writers. They basically could come up with any stupid new magic power whenever they had written themselves into a corner. I want to see the writers work for their living. Make the magic rules, then live with them when writing the end of the story.

After a while, a person can get used to all the overblown drama of these "Quest to save the World" magic and swordplay fantasies. From there it is quite a letdown, going for a simple motorcycle ride to Tim Hortons in Port Dover. Unless... through the power of imagination, to transform a simple ride into a quest. For example, Timmies becomes "The Palace of Horton" where I am seeking the chalice of decaf and donut of cruller. The barkeep refuses my Tim's Card, because he is so grateful that I am the great "Seeker of Truth" who is saving the world by slaying the evil minions of Half-truth in the Underworld of Blogosphere.

The reason I need to go to the Palace of Horton, is because my truth seeking powers grow weaker when I am trapped for too long in my Dungeon of Edgewood, fighting waves of mind-controlled zombies. So I need to rebuild my powers with the aforementioned chalice of decaf. I also enjoy meeting up with other fire breathing dragon riders of all types. The Slow Riders of Hog, and the Slow Riders of Non-Hog. Even the fast riders of Squid are welcome company.

Of course, I could not safely ride my fire breathing Vulcan past all the evil cagelings who are trying to kill me without my "Lid of Invincibility" and my "Cloak of Anti-Invisibility" (my helmet and high visibility colour motorcycle jacket).

So back to reality. The jet stream is dipping all the way south to Mexico right now. January is a washout. Can't wait to see the long range weather forecast for February.

Picture: Tabrett Bethell, on a "Legend of the Seeker" poster, that I lightly photoshopped. I like her character, Cara, a reformed evil "Mord'sith" now allied to the good guys. But she has hard time resisting the habit of killing people they meet along the way. Such as Tim Hortons cashiers who pour coffee instead of decaf. Or forget to put it in a china mug and save the environment.
Copyright the Lost Motorcyclist