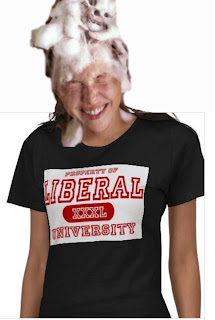 Most American universities are accused by the right wing conservatives of being too liberal. Certainly, polls of professors etc. substantiate the opinion. For example, only 5% of scientists claim to be Republican while about 40% claim to be Democrat. Similarly, fundamental religious groups feel excluded from power at Universities, where most professors, if they are religious at all, are not usually evangelical. The Christian religious fundamentalists have lately been strongly supporting the right wing agenda politically.

Extreme statements have been made about liberal universities brainwashing students, and not just in normal classroom lectures. As first year students arrive, orientation programs have been set up that also provide a liberal bias. "Affirmative Action Offices" are there to enforce liberal attitudes such as tolerance of non-Christian religions, and to prevent racial harassment.

There is a controversy about the non profit group "Foundation for Individual Rights in Education" or "FIRE". I first heard of FIRE in connection with two cases. The first case was at the University of Delaware. Freshman students were being subjected to an indoctrination program that promoted multiculturalism. FIRE tried to stop the program, citing in particular a sentence in the workbook stating "All white people in America are racists." and "Black people cannot be racist". The second case at Purdue in Indiana, where a student was reading a book about the KKK in a janitorial lunch room, and was accused of racism. An apology was made by the University after it was learned that the book was not racist, and actually came from the Purdue University library, and of course after FIRE (and the ACLU) defended the student.

After viewing the two videos about these cases, without knowing anything about FIRE, I simply concluded that FIRE was a right wing organization defending white students, Christians, or Republicans against harassment charges from minority groups, feminists, or liberals. Well it turned out to be far more complicated than that. So either they are hiding their agenda extremely well, or they are in fact an even handed and balanced organization.

(Delaware video) I have to comment on the slick propaganda in this production. Using the phrase "diversity" of opinion to attack multiculturalism and it's "Diversity" of cultures is clever word transposing. And you would never imagine Delaware has a very low 5% black student population, from the random campus shot at 3:11. It's also offensive to have the students chuckling at 3:17 while discussing black women and "All the oppression". Maybe those students really needed this program in order to have their eyes opened.

(Purdue video) Keith is portrayed as the sweetest guy in the world. It is never really explained in the video why an illiterate black woman on the janitorial staff would have taken offense at his book.

Is FIRE a front organization set up to appear as neutral and independent while it actually is carrying out a right wing racist agenda?

FIRE has vigorously defended it's status as an independent organization whose only interest is to protect students exercising their freedom of speech. They point out that they have also defended Prof. Ward Churchill, who made derogatory statements about Jews. (He still got fired, though, but for plagiarism, not Jew hating) They were founded by, and still have as CEO, Harvey A. Silvergate, who defended students for protesting the Vietnam war back in the sixties. Some of FIRE's top people claim to be Democrats, and "classical liberals".

But the reality seems to be that FIRE is attracting a lot of support from the right. They say it is not their fault. Most of the universities are very liberal, so naturally most cases of students (and faculty) being reprimanded, will probably be for expressing points of view that are conservative, racist, homophobic, or Christian. Apparently students are rarely reprimanded for making anti-Republican, anti-Christian, or anti-white race comments. Although FIRE claims to have defended a student newspaper for printing a story with the headline "Fuck Bush".

FIRE's logic actually kind of makes sense, but mostly as good propaganda. Because I am a liberal myself, I see universities as being the natural place of liberal values. Any university that encourages freedom of thought is naturally going to be liberal, is going to favour broad mindedness over narrow patriotism, should favour multiculturalism over white privilege. A university is of course going to question stories like Noah, and Adam and Eve, and support the Theory of Evolution against Christian creationism. Some American freshmen arrive at university unaware that their country was stolen from the Indians, don't know the world is billions of years old, are not aware that America still has racism, believe America singlehandedly saved the world at least three times, in some cases don't even know that George Washington was the first president, and some can't find America on a world map.

So to millions of patriotic, racist and fundamentalist Americans, first year at university can be an experience like being "brainwashed" into hating their country. And some of these students are naturally going to complain, especially if organizations like FIRE are offering $5000 scholarships for any videos of them having their "freedom of speech" curbed.

The jury is still out on whether "Foundation for Individual Rights in Education" is a front group for the right wing or not. I think the larger point is that as American culture becomes more right wing in general, led by anti-intellectual organizations like Fox News, there is going to be a bigger disconnect between places of higher learning, and the general American public. FIRE's supporting donations are increasingly going to come from conservatives. And as that happens, I believe it is inevitable that FIRE will increasingly defend conservative students against liberal university values, while trying to maintain the cover of neutrality as long as they can.

Here is a typical (I guess) FIRE case being discussed in a blog, how the University of Minnesota is brainwashing K-12 teachers into hating America. All the people commenting seem to be conservative, and the rhetoric is all at a typical Fox News anti-intellectual level, including the original blog and the readers comments. Unfortunately, those are the people most likely to donate to FIRE. I sure wouldn't.

Picture: I photoshopped (Actually using Gimp in Linux, I just use photoshop as a generic word) a girl's head with soap in the hair to represent brainwashing on to a "property of liberal university" T-shirt. Too subtle?
Copyright the Lost Motorcyclist