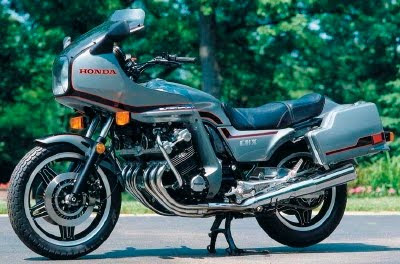 BMW has announced it will be producing an inline six motorcycle. From their press release:

"The new BMW straight-six will further expand the K-Series in the foreseeable future. The first model to be introduced will be an innovative and luxurious BMW touring machine."

The inline six has a certain appeal for me. My first car was an inline six, which later became an inline five, then I sold it. And in the late eighties I made some memorable trips on my Honda CBX, which also was an inline 6.

The great appeal of the six, is that six is more than four, i.e. prestige. With so many motorcycles and cars being four cylinders, sixes start to sound kind of exotic. But then we come to reality. Why deal with the extra weight, cost, maintenance, and length of the inline six when a four will do?

Let's assume the same total displacement, which is the only fair way to compare engines. A six cylinder engine can make more power than a four because it can rev faster. So in a race pitting bikes limited to, say 250 cc, against each other, the six will produce more power and win. In fact Honda did this soon after they entered the world of Gran Prix motorcycle racing. In 1966 and 1967, Mike Hailwood won four world championships on 250 and 350 cc Honda sixes. After 1967, six cylinder motorbikes were banned from racing, as being unfair competition.

For years Honda tried to circumvent the rule by developing an oval cylinder bike, the NR500, which it introduced in 1979, but without success.

In real life, six cylinders do not have such performance advantage over four, because they are not built to turn at their theoretical speed limits. Part of the problem is that amateur drivers develop anxieties hearing their engines spin up to 12,000 rpm. Well most amateurs do anyway. But a professional factory sponsored racer doesn't care all that much if the engine blows up, as that's the factory's problem. The racer's problem is going fastest on the track.

But the six does have one important advantage over the four cylinder motorcycle. It doesn't vibrate. Of course, there is always a little bit of vibration in moving machinery, but the inline six is the engine configuration with smallest number of cylinders where all primary and secondary imbalances are eliminated. So you don't need a counter-rotating weight inside the engine, and you don't need rubber mounts on the engine. The engine saves on weight and complexity, and the frame can be made lighter because the rigidly mounted engine reinforces the stiffness of the frame. Another benefit is a lighter flywheel, because flywheels are designed to smooth out the power pulses, and the inline six has more, smaller pulses to smooth out.

The Honda CBX was not a really successful overall design, because of the cost. Rival machines with only four cylinders proved to be faster at the drag strip, and so in the real world of motorcycle sales, those few hundredths of a second meant the end of the Honda CBX. The prestige of the two extra cylinders could not overcome the word in the motorcycle magazines, that this was a slower bike.

My own CBX was quite a thrill to drive, equipped with moderately loud racing exhausts. If I was stuck behind a sleeping car driver at the traffic lights, all I needed to do was quickly blip the throttle, and the almost unearthly sound of the air-cooled six coupled to two Wolf mufflers, would wake them up. A six makes a slightly different sound from a four, for two reasons. One is that it usually a bit of a longer stroke/bore ratio, that gives the exhaust a more mellow sound than the modern short stroke engines. Engines from the thirties for example, all had extremely long strokes compared to the bore diameter, and we think of those engines as having more mellow sounds than machines today. And with six cylinder compared to four, there were more exhaust pulses per second at the same rpm. But there was another reason that the CBX sounded different. Without a heavy flywheel to slow down the engine, it picked up speed very quickly, jumping from 1000 rpm to 5000 rpm almost instantly. Anyway it always worked, and the bike just sounded like a grand prix racer.

It also sounded interesting when started up after a week of sitting. First a couple of cylinders would fire, sounding like a Harley. Then a few more would cut in and it sounded actually a bit like a V8 car. Finally the last two cylinders would begin firing, and then it sounded like a race car, or maybe a turboprop engine.

Another thing I really liked about the CBX, was that the two outer cylinders on each end of the engine acted as leg shields.

Picture: Stolen off the Internet, so this bike has stock chrome Honda exhaust pipes.
Copyright the Lost Motorcyclist