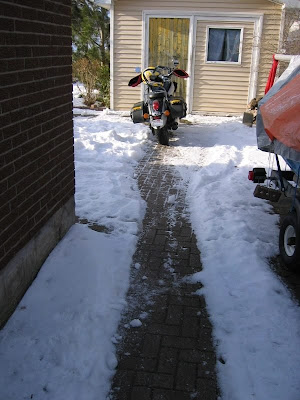 One advantage to living in the south of Canada, is that you can go for a motorcycle ride in almost any month of the year. I'm not saying it's easy, because you don't get many days to choose from, and you need to be almost ready to go any day. Of course you dress warm, and be careful of your route, and a hundred other things. But that is all stuff you might be forced to do in the summer if you live further north, where I did before moving down to sunny Kitchener in 1979.

Today it was possible to go for my January ride. I already did December, that one was actually pretty easy. January is often the month with fewest choices of good days. Today the roads had mostly dried up, we have not had a lot of snow this year, it was sunny and -1c.

When there is a chance for a lot of snow beside the road, it's best ride just below freezing, (-2c). When it's warmer, the melting snow creates pools  of salty meltwater on the roads. It's not dangerous, but it's corrosive.

This January ride has split the winter right down the middle. I prefer two short winters to one long one.

The biggest difficulty today was opening the garage and getting the bike turned around. I don't have a snowblower, and I don't keep the driveway down to bare bricks just for fun. The only problem with that is if we get an unexpected nice day, the ice makes it difficult to get the bike out of the garage (which you can see is behind the house in the picture) and down to the street. I couldn't get the (hinged) garage doors open without chipping ice away, and that took about ten minutes. Then I couldn't turn the bike around because there was a big lump of ice in the turning area that I could not back the bike up over. So more chipping the ice, then edging the bike back and forth until I had it turned enough to be able to use the engine. Once almost slipped when I put my foot on an icy patch. Coming back in was easy after the ride.

The bike fired right up, as I expected. It's great to have fuel injection that works.  I was surprised to find the bike very comfortable, both the seat and the handlebars. The rear spring was actually softer than I remembered it from December.  Time plays tricks with the memory.

As soon as I got on the road, I noticed that gas would be needed so I went to Petro Canada, where the pump had a sign on it "Winter Gas" I'm not sure that's what I really want, but fill up anyway. Then out on to the 401 for a high speed blast, with the heated vest plugged in.

There was not much traffic as I headed to New Dundee, where there is a motorcycle accessories shop named Vicious Cycle. I found out about them at the Toronto motorcycle show last week, so it seemed like a good destination for my ride today, and there was "motorcycle only parking" in front. They have a Kawasaki KLR 650 fully loaded with accessories that you can see in their shop and order those accessories. That's a good idea. Normally it's confusing trying to order universal accessories from a catalog without seeing them on a bike. The place was a lot bigger than I thought it would be, and they have a website.

There weren't any customers in the shop, but the people there were still amazingly busy, although the same person I met at the show talked to me for a while about the accessories on the KLR650, including the Trax aluminum luggage cases.

I got home before the sun went down, and I only hit one spot where some snow had drifted on the road a little. I don't think the bike got much dirt on it, I hate getting salt on the bike in winter, although it's not really a safety issue.

Picture: Putting the bike away for another month?
Copyright the Lost Motorcyclist