The Rise of Evangelism 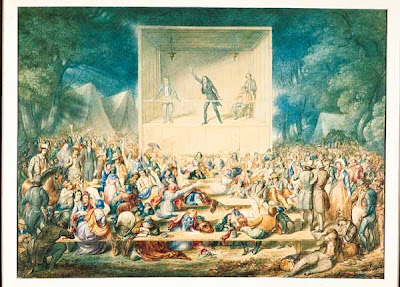 It is difficult to write about the history of Evangelism without bias. You either believe devils work among men, or you don't. I am not a believer, I may come off as biased. Because this debate is still ongoing, claims and counter claims are flying around. For example claims that science is actually religion in disguise. Other claims that our scientific advances are based on biblical knowledge, or that atheistic scientists are holding back the advance of technology. There is another accusation, that the age of reason has made possible horrors such as the Nazi holocaust.

I'm going to make the assumption that science is actually science. Religion is actually religion. Science mostly looks at nature, needs evidence and uses logical reasoning. Religion is based more on emotion, faith, and the supernatural. And considering the various types of religion, the Evangelicals use more faith and emotion than many others. Evangelicals also try to explain our natural world in terms of supernatural forces.


The Rise of Evangelism

The growth of a new way of thinking, whether a religion or scientific theories, can be studied in the same was as the growth of a plant or animal species. The new idea needs a method of reproduction, whether by birthrate or by new converts. It "lives" in an environment made of people with their own understanding of the world, with ideas, hopes, fears, and myths. A new way of thinking has competition from contradictory ideas, and always faces resistance from the the powers that be. It has adaptive measures to help it survive, the way a living organism would, including camouflage, defensive and offensive capabilities, sharp senses, intelligence, or speed. And success is measured by growth of population, or survival.  Much of the success depends on how good the adaptive measures are, how well they fit the environment, how fast the species can adapt to changing conditions, and how weak the competition is.

I am reading the book "Southern Cross" by Christine Leigh Heyrman, the history of Christianity in the southern US bible belt published in 1997.

The book reads like a university History course textbook. It starts off in the time before the American War of Independence, when the Evangelicals were a small minority in the south, and the Anglicans were the established religion.

It is the story of a small fringe religion that became a dominant force, and reading this book helps to understand how it grew.

There were many factors that worked in favour of the Evangelicals. Because it was a small, decentralized religion with a very loose hierarchy, the various itinerant preachers were free to experiment, to modify, to adapt new ideas. Each preacher could see what worked and what didn't. Those that stumbled across ideas that worked, would thrive. Others dropped out and were forgotten. Each preacher had plenty of enthusiasm unhampered by orders from the boss. Each one was his own "boss" serving God, not man. Motivation among them was very strong.

To encourage rapid growth, Evangelicals dropped the requirement that Pastors have any higher education.  This gave them an edge in recruiting new pastors to travel to poor pioneer communities, but also let a some ignorance and superstition creep into their religion.

The old Anglican Church was a monolithic hierarchy, slow to change, unwilling to adopt new ides. Additionally, because Anglicans were also the official religion of England, they lost much of their "official" status after independence. They did their best, but did not have the extraordinary motivation of the Evangelicals to find converts. Meanwhile, the energetic Evangelists were travelling miles up-country as America began to expand into former Indian territory.

The main idea of the old Anglican church seemed to be, go to church and keep quiet. If you have problems, keep them to yourself or pray silently. It did not ask its members to seek out new converts. Why would it need to, as the dominant church?

The Evangelicals were a more emotional church. They took the approach that everyone had burdens that were too much to bear, physically, spiritually, and mentally. They promised to relieve you of those burdens, if you accepted their Jesus.

The Evangelicals also were were evolving quickly, and adapting to their environment. The basic approach was improved and retuned as the church grew, and evolved in an almost organic way. The theology and the ideology changed, methods were tried and adopted or abandoned. These changes happened relatively quickly among the Evangelicals compared to an established religion like Roman Catholic or the Anglican Church.

Many of the adaptations were made to appeal to the settlers of the south, especially those who lived in the mountains or in the new frontier. The Evangelical religion grew in the back country and in the coastal cities. Some people had very little education and some were completely illiterate, such as the black slaves who were permitted to attend meetings (when the Evangelicals opposed slavery).

The population of the south was made up of European immigrants (Irish, Scottish, English and some others), black slaves, and free black men, and some native Indians. There was a strong current of superstition, witchcraft, spell casting, ghosts, and demons both visible and invisible. Every natural phenomena was sent by the devil, from earthquakes to eclipses of the sun. It was known that witches transformed into animals that could not be killed by anything but a silver bullet. People feared not only real hardships, but also the evil eye and curses. They often turned to fortune tellers and witch-doctors to make or break spells, and to faith healing. They feared unlucky Fridays, and magical numbers.

The Evangelicals tapped into this superstitious tendency, and made it fit with their interpretation of the Bible.

The Evangelicals made it a priority to bring in converts. The basic approach with potential recruits was to sympathise with their superhuman burdens. Apparently there were more than enough people with unbearable burdens, so this touched a real nerve. Next step was to offer relief, through Jesus. The Evangelicals could explain almost any problem a person was having, in terms of the devil or God. They had all the answers, including miracles, faith healing, and eternal peace of mind. They also were usually ready with excuses in case some of their wilder promises did not work out as planned.

You would not expect such a religious system to work in every case, and it didn't. But because the Evangelicals were a loose organization, the unsuccessful pastors could fail without reflecting too badly on the reputation of the rest. The successful ones could be emulated, and help the others. If things went wrong, it was not a reflection on the whole movement, just another bad preacher who deserved to fail because he was not a true believer.

The general ideology centred on the bible as the ultimate authority, and on rejecting the newly developing ideas of science.

Some Evangelical pastors were opposed to such heavy emphasis on superstition, and those same people were regularly accused of being in league with the devil. As Evangelism grew, its ideas evolved in the direction of the supernatural. Evangelism eventually turned more towards witchcraft and devils to explain the bad things. Their main argument for conversion, was based on the idea that people were suffering in some way, mental, or physical. And the Evangelicals would explain the suffering in terms of witchcraft or the devil. They offered salvation by baptism to their religion.

Their persuasive arguments were backed up with stories of miracles, scenes of people being converted, falling to the floor screaming and shaking with the spirit of God or the Devil. It had a powerful effect on many people in the south of the USA and on the frontier, where they were suffering the hardships of pioneer living, some facing the terrors of Indian attack, some living in fear of a slave uprising, and very few with any access to education.

The Evangelicals came in for much ridicule from more educated people, and shrugged it off. They successfully made such ridicule fit their self image of being persecuted for Jesus.

The Evangelicals' initial successes were among the young, and the females. This had a tendency to undermine the unity of families. Later, as they expanded their base, to gain more converts "they catered to adult, male-dominated family order (while still proselytizing youth and women); and they supported the rightness of slavery and racial hierarchy, willing to lose African American followers if they gained white ones." Steven Stowe, Indiana University

A quote from Southern Cross said the Evangelicals "wanted to have it both ways - to discount the sway of demons and wonder-workers even as they played upon the susceptibilities of those who still inhabited a world shot through with marvel and mystery" p. 75-76

Christine Heyrman gives this following quote from John Wesley, (one of the fathers of Evangelism) supporting the eventual use of witchcraft and demons as a bold feature of Evangelicalism (I paraphrased this quote)

"Most learned men in Europe have given up all accounts of witches and apparitions as mere old wives' tales for they well know ... that giving up witchcraft is in effect, giving up the Bible; and they know that if but one account of the intercourse of men with separate spirits be admitted, their whole castle in the air falls to the ground."

So Wesley concludes that they should retain this weapon of witchcraft in the hands of their church.


Struggles within the Evangelical Church

There were two basic struggles within the church that were ultimately decided because of their appeal to the white people of the South in the nineteenth century.

First decision was to go with a heavy emphasis on superstition, the works of the Devil, and miracles, rather than science and reason which was becoming fashionable in Europe during the industrial revolution.

The second decision was to support slavery, which was more a matter of practicality than of scripture, and ultimately proved to be a mistake that was denounced much later near the beginning of the 21st century, when it seemed like racism was never going to return.

Although slavery is now a thing of the past, the fight goes on against science, especially in the teaching of evolution in public schools.