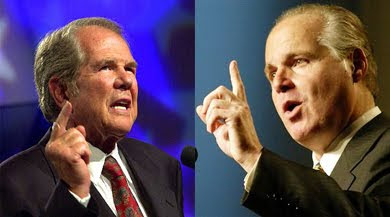 Secondly, any pact with the devil, although it may or may not bring what you ask for, it will bring much more bad stuff eventually. Or not, depending on what the devil feels like.

The actual wording of Haiti's "Pact with the Devil" that Pat Robertson referred to, goes like this:

"The god who created the earth; who created the sun that gives us light. The god who holds up the ocean; who makes the thunder roar. Our god who has ears to hear. You who are hidden in the clouds; who watch us from where you are. You see all that the white has made us suffer. The white man's god asks him to commit crimes. But the god within us wants to do good. Our god, who is so good, so just, he orders us to revenge our wrongs. It's he who will direct our arms and bring us the victory. It's he who will assist us. We all should throw away the image of the white men's god, who is so pitiless. Listen to the voice for liberty that speaks in all our
hearts."

From the Associated Baptist Press

Nobody knows for sure that this was the actual historical pact with the devil, The Voodoo priest might have said something else, as there were no eyewitness. And many other words were probably said during the pact making ceremony, for example about the 200 year limit. But this wording is the best we have to go on about the pact. An unspecified God was named in the pact, but not the White man's God. At that time was known that to be God, you had to be White, so the "god" referred to in the pact must have been the devil. That's how Pat knows it was a "Pact with the Devil".

We have no real proof of course, that they said these words. But we have the following circumstantial evidence to back it up.

I wonder if anyone can see in this, the heritage of Puritan thinking that led to the witch burnings in Salem Massachusetts. Rumors and hearsay, backed up by the circumstantial evidence (poverty).

Picture: Limbaugh and Robertson together at last