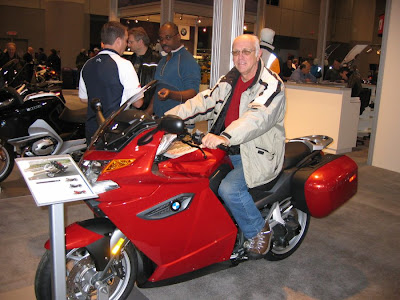 I went to the Toronto International Motorcycle Show today, alone, as Mary Ann gets bored watching me search for motorcycle stuff such as handlebars. Just about how bored I get on nature walks watching her watching red hatched nut bobbers. At least I don't ask her to "Look look it's right over there. Can't you see it???? It on the fourth branch from the top of the seventh tree from the left!. Here just follow my finger where it's pointing.". "It's OK dear, I saw a bird before. Now can we just do some walking?"

Getting back to the show, I happened to stop by the BMW booth to get any information they may have on the inline six engine. In what I might call typical BMW dealer fashion, he was skeptical that BMW was actually going to produce the bike or "I'll believe it when I see it." According to him, it was a mock-up. I said, it looks like the engine has been designed and is finished. He seemed dubious. He pointed to the K1300GT and said "Have you ever ridden one of these four cylinder bikes? It already has 170 hp.". I admitted that no, I had not ridden one, but I had ridden my K1100LT a lot. He said there was no comparison, the GT was so much smoother and more powerful.

Well, I don't know if this was busting my bubble or not. But I had already decided against buying the four cylinder K1300GT, because it was too expensive, and the dealer was too far away, and the BMW's are not as reliable as Japanese bikes. That is why I have a Vulcan 900. It would take something special to convince me to drop a big load of cash on a bike that has no dealer within 100 km.  After my K1100LT broke down, I couldn't get it fixed, and I couldn't even trade it for a new one. So if it's another four cylinder, no thanks. But if it's a six, and I am a big fan of the inline six, I may catch bike fever. I may be the only one, but actually I don't worry too much about what everybody else wants.

It kind of gives me a sense of deja vu. At the same show in 1992, I owned a Honda CBX but I was really interested in the new BMW K1100LT with the electrically adjustable windshield. So I naturally went to the BMW booth to inquire about it. "No," they said. "It's just a silly gimmick. You'll probably adjust it once in your life then leave it there. A waste of space, and a dead weight." What is it with these guys? I wouldn't slag a competitor's bike like that, let alone mine!

Anyway, I ended up buying one of those. I probably adjusted the windshield about 30,000 times. The electrics broke down twice in 15 years and I repaired it myself each time because I couldn't do without that windshield button. It became an essential piece of equipment, like air in the tires, or foam on the seat. And look at the competitor's sport touring bikes. Today, 18 years later, every single one as far as I know, has an electrically adjustable wind screen. They can't sell a sport touring without one any more.

Picture: This is actually me from the December show, on a red K1300GT. I forgot to take pictures today.
Copyright the Lost Motorcyclist