Motorcycle Jackets can also be for Motorcycling 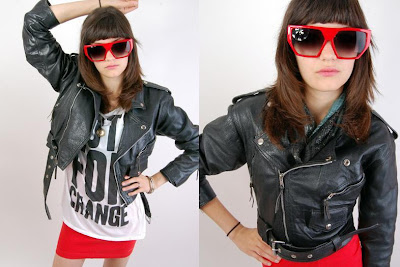 Motorcycle jackets were on sale at the show, some under $100, for a leather jacket that seemed to be quite thick. Most of the good, yet inexpensive, jackets I saw came from Pakistan. I was wondering why, then I thought about all the sacred cows right next door in India. What happens when a sacred cow gets hit by a car or truck? Probably the simplest thing is to drag it over to Pakistan, where they have no scruples about turning it in to a motorcycle jacket. My best motorcycle jacket ever, was a Dakar type jacket that came from Pakistan. It was made of real thick leather, I have passed it on to Michael, so it's still getting a lot of use after twenty years. And it has been down on the road a few times too, I think Michael was wearing it in both his crashes and the jacket is still usable, and provided all the protection you could ask for.

I bought my first motorcycle jacket in 1981, it was plain, but after over ten years of motorcycling in non specialized jackets and windbreakers, I really liked it just because it was the first time I ever had a real leather motorcycle jacket. I chose blue because in those days black was still a bit too "evil", even for a motorcyclist.

A few years ago, the trend started to "distressed leather", which looks like it's been beaten up for 20 years right off the rack at jackets 'r us. Mary Ann was unaware of this new trend, as she almost always is of anything that may be happening in a shopping mall. We were on our way to B.C. by motorcycle, we had stopped at a restaurant, and a motorcyclist pulled in on a nice Moto Guzzi, probably also heading to Sturgis for the big rally. He was wearing one of these "distressed leather" jackets. After he left she commented that he must be a very experienced rider, from the look of his jacket (compared to mine I assume), and we had a discussion, "how do you know it's not just a really really old jacket". Well, when the jacket looks older than the guy, that's one way. Also, if the jacket looks a lot more distressed than the bike. It also happened to be the only distressed thing he was wearing, do you think he would have bought everything new except the jacket? That's not how most people buy stuff after they've been riding a few years. Some things wear out before other things. I often have to buy a new pair of gloves, they really go fast. Sometimes I just lose the things and need a new pair. All the other things wear out at their own rate, and I don't replace everything in one shopping trip just because the gloves wear out. One time I might get a helmet, next year new boots, some years I don't need anything new. Like this year at the show, I was just looking. But I noticed that distressed jackets were nowhere to be seen. I guess that fad died out quick. As far as I know, jackets were the only item you could buy that came pre-beaten. For example, the Shoei factory never did hire a guy to beat the crap out of the helmets for you.

Nowadays most jackets are cordura nylon with a goretex inner liner to protect you from rain (this protection is more promise than reality). They have padding (also dramatically called armour cladding) at the elbows and shoulders and usually the spine too. They sometimes have reflective strips for visibility, and bright colours. Vents and removable liners make them practical for a wide variety of conditions. I have several Joe Rocket jackets, which are widely available, and reasonably priced. In the bigger one, which I usually wear in winter with sweaters, I put an old plastic raincoat in between the liner and the jacket, for real waterproofing. I know it doesn't "breathe" like Goretex, but in the cold weather that doesn't bother me too much.

When it's really hot, what works best for me (on a faired bike, or with a windshield) is to open the cuffs at the wrists, and let the air blast up the sleeve. I'm sure the jacket puffs up a little, but the cooling breeze is almost like having air conditioning. I would say it's the only way to survive the midwest in the middle of the summer, about when Sturgis is held. Also by slightly moving my grip I can reduce the air flow at will. The most serious problem is getting flies up the sleeves. Many years ago, I was at a stop light and spotted a Praying Mantis creeping out of the sleeve. And, even worse is getting a bee up there that stings you. It's a situation where you have to get off the road fast and stop, but luckily it never happens in really busy traffic, usually just out on hot and lonely country roads with flowers everywhere.
Copyright the Lost Motorcyclist