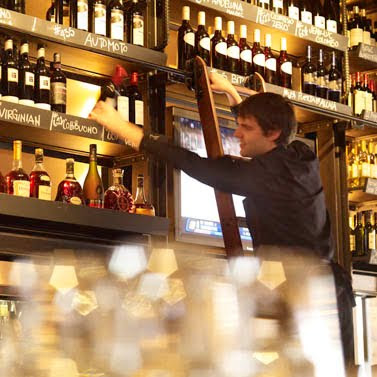 Here is a new idea for me, as if I don't have enough stuff to write about. How about a restaurant review? Last night Mary Ann and I went out to a new restaurant called The Bauer Kitchen, located in the newly renovated Bauer skate factory. I have no idea where they make skates now. Actually yes, I do.

Mary Ann does not like to go to the food court for our anniversary dinners, and Bauer's obviously had table service, so we decided to try it.

I am lacking in imagination when we go out, and usually order what the restaurant is famous for. At the Fritter Place in Port Dover, I order Apple Fritters. Luckily, because they don't have anything else. At Bobby O'Brien's in Kitchener, I order beer and wings. I like making my decision quickly, the quicker I make up my mind, the quicker I get my food. So last time I was at Knechtel's in Port Dover, I had ordered the perch dinner while walking past the waitress on my way to the table. It helps that I was on my own. Because when Mary Ann is there, as a rule, the waitress will return four or more times, with the question "Are you ready to order yet?" And as I have found out, it is not good to say "Well I am, so just take my order now"

In an unfamiliar restaurant, where I don't even know what they're famous for, I like to order the rib dinner. This is what I ordered at Bauer's. But it was called "Short Ribs with Potato Gnocchi". Unfortunately I didn't have a clue what potato Gnocchi was, and still don't know how to pronounce it. So I ordered "short rib dinner". When it showed up, actually brought by a different waitress, she put it in front of me, and called it "Gnocchi", but I didn't remember or even understand the word, and not only that, but the ribs had already been deboned, so they did not look at all like ribs either. So I guess I said something like "Did I order this?"

One thing you will notice about most restaurants is that the stupider you are, the nicer the wait staff will treat you, so I get a lot of good service usually. Unless I'm at Tim Horton's where the competition is fierce. So the waitress said "Oh I'm sorry, we must have misunderstood, I'll bring you something else if you want." I didn't want to wait any longer as we had already been there some time before deciding. So remembering the Gnocchi potatoes, I said, "maybe it's the pronunciation of that word." The waitress was very understanding, and pleasant about it, meaning this must have been an unusually dumb statement on my part.

Anyway, the food was great,even the gnocchi (tastes like potato perogies), the dessert too. I always order cheesecake, and theirs was about the best, with white chocolate, blueberries, and some other stuff. But cheesecake is always pretty good wherever I go. I didn't get sick afterwards, which to me is an important consideration. I didn't go away hungry, it cost less than our average anniversary night out, and Mary Ann really liked it too. So it's highly recommended.
Copyright the Lost Motorcyclist