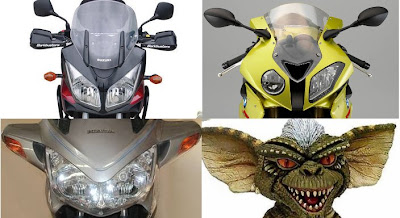 After I designed the new BMW 6 cylinder touring bike, and saw it was good, I decided to launch into the topic of motorcycle styling trends. I will also resist the temptation to turn this into a rant.

Forty years ago, the stylists' job at a motorcycle company was limited. Most of the motorcycle's shape was dictated by engineering requirements, or by law (for example the shape of the headlight). Most of the bike was made from metal, with manufacturing constraints on the shape of such things as fenders, wheels, and gas tanks. Even seats were limited as to the shape and colour. Also motorcyclists were a tradition-bound group, rejecting any attempts at radical styling touches such as the Vincent "Black Prince". Mostly the stylists were limited to choosing the colour and pattern of the paint on the gas tank, and giving advice to the engineers about how to not create a motorcycle that looked like it was cobbled together from a parts bin.

Although many motorcyclists have not really changed their tastes, there are new riders that do not cling to tradition, for example Mary Ann, who seems to not be at all put off by the non-traditional shape of the Burgman 400. Those who do cling to tradition are more likely to buy something like a Harley Davidson, and not one of the newfangled V-Rods either, just the old fashioned ones.

Over the years, manufacturing processes have changed, and radical new styling possibilities have opened up. One such technology is Computer Aided Design, which permits complex shapes to be designed quickly that previously might have required a whole team of stylists working for years to develop. Modern plastics can be molded to any shape, almost any finish (e.g. like chrome), can resist high temperatures, and high stress. They can be used for anything from engine covers to luggage racks. Plastics are commonly used for fairings, and fenders, where metal used to be the rule.

Modern motorcycles also now use a variety of frame designs that were not possible forty years ago. So large section aluminum frames have become incorporated into the styles of many bikes. The aluminum frames can be more easily styled than the old steel tube frames, whose shapes were strictly a matter of engineering.

Even the wheels, which are now often made of alloys rather than the old laced up spokes, can be styling exercises.

Laws have changed, too, permitting different headlight shapes, which in turn open up more possibilities with the surrounding fairings. The headlamps themselves have been developed in a wide variety of shapes, the most common, I think being the "evil gremlin eyes" from the movie "Gremlins".

It seems like today, the stylists have free rein to turn almost any dream (or nightmare) into reality. But they are always wary of the fickle customers. Stylists always tread a fine line between being "original" and being "wacko". The Harley Davidson company has become profitable in part by catering to the traditionalists. Although they have made attempts at pushing the boundaries of traditional design, they have also occasionally crossed the line and been punished for it. But the result is that Harley today has the best knowledge of any manufacturer about where that line is drawn. Many other companies try to follow their example.

If you were to look closely at my Vulcan 900, you could see that Kawasaki is "styling" a modern motorcycle to look traditional. Even the engine, perhaps especially the engine, has nothing on it that is dictated by engineering. Almost every visible part of what you think is the engine, is a styling trick to make a modern engine look like an old fashioned one. The side covers, air intake box, and cylinder head covers are all plastic covers, looking like chromed metal, that have no function other than decoration. You can take the the engine plastic covers off if you like, but it's going to be ugly. The engine cooling fins are actually metal, but since the engine is water cooled, the fins are only there for the traditional look. The radiator, probably the only concession to reality, is somewhat hidden, and I'm sure the stylists would like to make it disappear altogether. But it's easier to cover something than it is to make it invisible. The exhaust pipes are totally covered by metal heat shields that actually look like exhaust pipes, only much bigger.

There is one fashion trend that all stylists have to accommodate, and that is the fad of wide rear tires. Today, the rear tires of most bikes are wider than optimum, and getting wider every year. Some are getting so wide that they begin to compromise safety, especially on custom bikes. But the customers ask for wider tires, so we'll have to see how far that goes before the pendulum of taste swings back.

Picture: Can you spot the one that is different? The BMW, because it has asymmetric headlights. Also shown, a Suzuki V-Strom, a Honda ST1300, and a Gremlin.
Copyright the Lost Motorcyclist