Republicans in the Office (Of Counter Terrorism) 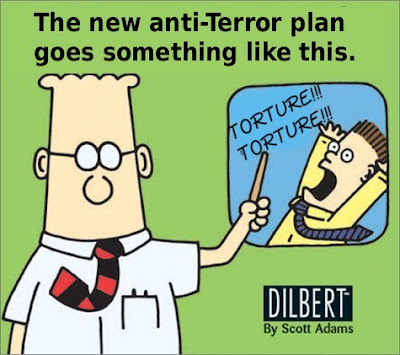 An interesting case has just come up in the murky world of intelligence gathering. It once again brings up the topic of how best to get important information, by torture or not by torture?

The pro-torture crowd uses this simple situation to make their case. An atomic bomb is about to go off in 10 minutes in New York. You have the bomber in custody, and he doesn't want to talk. Do you torture him and get the answers you need, or wimp out and let the building blow up (and most of the rest of the city?) A simple situation with a simple answer.

This situation is actually the easy part of the process of intelligence gathering. You have the bad guy in custody. You know he knows something that you need to know. You have a way to verify quickly whether or not his answer is correct. At that point you really would have to fumble the ball badly to not get the information you need, like for example if you threatened him with a loaded gun, it prematurely went off and killed him.  So let's stop using this mythical situation to rationalize torture.

A part of intelligence gathering that has importance in real life, is having ordinary people voluntarily come forward with important information. I know this is too passive to have any appeal to the bulked-up-on-steroids types among us, but in the overall security picture, this part of the intelligence gathering is usually 60 percent of the effort. In this type of operation, you must be seen as the "good guys" by at least some of the local people, and you must have the infrastructure in place to sort through the incoming data. Notice here that passive intelligence is actually somewhat in conflict with torture intelligence.

Now for the most difficult part of the process, the one that breaks down most often, and is the greatest threat to our security. Once the raw data is obtained by one department, how and when does it get passed to another department within the system? That is where the usual office politics and personality conflicts get in the way of people doing their job, day in and day out to the best of their abilities. To learn more about how office bickering can reduce effectiveness, you will need to go to "Dilbert". I know it's a cartoon, but it is a cartoon ironically based on "tips" sent in by people on the ground who deal with this stuff every day in a real office.

The situation I started off with in this blog post is the underwear bomber. Nobody needed to be tortured to save that plane. The very fact that an internationally well liked African-American was president, and had signed a bill renouncing torture, made it possible that the bomber's own father would come forward with the tip that his son was going to try something. All that was necessary to stop him was that the various paper shufflers in government offices should be able to promptly deliver this information to the right inbasket. You would think that since this problem was identified as part of the cause of 9/11, something could have been done about it by now.

But sadly, most of the public discourse is still all about whether or not to torture. If not torture, then even stupider things such as whether to declare war on Yemen. The debate is not about people in the bureaucracy doing their jobs. And what might help is to at least have somebody in charge of the Transportation Security Administration (TSA). Obama's appointee has been blocked for months now. By petty political bickering, of course. The head of Customs and Border Protection agency also remains vacant, but no one has been chosen yet, so I'm not sure if you can blame that on political bickering. That won't even begin until someone is chosen.

Another issue about these appointees and why so may jobs are unfilled (125 senior political appointments remain open and 96 nominations await Congressional confirmation). Would you want to take a job that apparently the entire country thinks is so irrelevant that the job is empty for up to a year, and yet if any attack ever succeeded, the person holding that job would be the first to be pilloried? Now that is classical office politics.

Picture: My words on the cartoon.
Copyright the Lost Motorcyclist