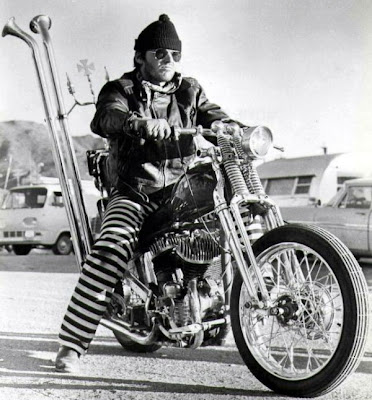 I came across a blog yesterday that caught my eye for two reasons. It was called "Forty Years on Two Wheels", and as of January 1, I have also been motorcycling for forty years. And secondly, the writer just bought a Kawasaki Vulcan 900 exactly like mine, even the colour. But before I could congratulate him on his excellent taste, I realized that after five years he was ending the motorcycling blog.

I was worried that it was the Vulcan 900 that had actually killed his desire to ride a motorcycle, but not really. He was riding less, however, and did not really seem enthused any more after five years of writing almost daily, which is quite understandable. And he did say he would continue riding, though not blogging about it.

But there is still the issue of putting the excitement back in motorcycling. After buying the Vulcan in October, he wrote a blog named "The Revolving Garage Door". Like many other people, he claims to have a short attention span, and keeps a bike for only six months or so before wanting something different.

Occasionally getting bored is something almost any older rider can relate to. Although it may seem like my advice is directed only at this blogger, he probably has figured it out himself already. This advice is for the rest of you. Absolutely everybody either has this situation now or will have it. And I'm not even saying you need to figure it out, because it is natural for people to change their interests with time. I just happen to know it is easier for me to have fun on a motorcycle than anything else. I have tried other things, and every time I come back to motorcycling, I realize that this is what I like best. Not everybody will be like that. We are all just looking for what feels best for us and it may be something else for you. It is also worth while trying other things from time to time.

The revolving garage door syndrome is one part of the loss of interest in motorcycling. If you have plenty of money, there are lots of bikes out there to entice you for one reason or another. You want the power, coolness, image, or bikes that are specialized for off-road, or race tracks, or long distance touring. Sometimes it's some new feature that you must have, maybe an electric windshield (that got me to buy a bike once) or an electrically adjustable suspension (that could work for me in the future). Some bikes are just sooo cool that you would park one at a motorcycle show just to see how many people would gather around it to gasp in awe.

Much of the excitement about motorcycling has more to do with the bike than the actual motorcycling. But although I can understand that, the reason I stick with one bike for a longer time is out of a sense of economic prudence. Changing bikes frequently is not only expensive, it can be addictive. You can keep it up for a while, but after forty years it begins to wear down the finances, just at a point where you are retiring from work. When when you are finally forced to choose a bike that is practical, rather than exciting, the rush goes away.

How do you slow down the revolving garage door without losing the fun of motorcycling? Maybe I shouldn't be commenting on this, because as a Canadian (rather than Arizonian), every year my interest is automatically boosted by "Spring Fever". Well known to Canadian bikers, who all wish they actually lived in Arizona, Spring Fever is a disease that strikes when the snow goes away. We are so happy to get out on a bike that we don't care what pile of crap we are riding. That realization only sets in by September, and by then were are all gripped with a panic called "the last ride of the season", before we freeze our asses off for another winter. I suppose if I was living in Arizona, I would not have this regular boost, and my interest may drift to other things. I don't know. So for non-Canadians anyway, one answer to the revolving door is "Move to Canada".

Second, even Canadian motorcyclists have to consider the "Food Chain" syndrome. If you are comparing yourself riding a plain old Vulcan 900 (which has now become the smallest Vulcan), to everybody else on bigger, faster, more expensive bikes, that will take away some of the thrill for sure. But there is an easy cure. Do not take the Vulcan to Harley Davidson Show'n Shines, or to sports bike rallies. That is very bad for the ego, as one of three things will happen. First, you are ignored. Second, you are told that at least it's a motorcycle, and you are welcome to attend. Third (and best, actually) some Harley biker will make a negative comment about your bike. Now you can understand why little kids prefer to be yelled at for doing something bad, than being ignored. I would suggest that instead of going to Harley show 'n shines, that you join a scooter or moped club with the Vulcan 900.

It is possible that some of my activities help maintain an interest in motorcycling. For example, I also walk a lot, and ride a bicycle. Compared to each of those, motorcycling is still quite a blast.

I have noticed that anyone who keeps a bike for a long time, has usually done some home made modifications that they often take as much pride in as the entire rest of the bike. True, some of those modifications cost more than the entire rest of the bike, but they don't have to. On the Vulcan the only accessory that I paid a lot for was the Airhawk seat, which was $150. But I did a lot of work removing stuff from the bike, which is cheap, and by reducing weight also boosts speed. Then I added splash guards for my feet which I think cost $12 including the hardware store brackets. I tilted the windshield back, which cost nothing because I used some brackets I have been saving for 30 years. I adjusted the suspension, again free because it is adjustable. I bent the heel shifter out of the way of my boot, again free of charge. My handlebar muffs were pretty expensive: $40 for the muffs, but I had to buy a pair of different mirrors for $22 or the muffs didn't fit right. So far I'm in for less than $300. I still have some planned changes coming. I want new handlebars that are narrower and reach further back. I bought a pair last year that are still hung up in the garage, because the only problem was they were further forward. And wider. And I would like a high-mounted LED brake light. Once I have those taken care of, I would not be too interested in starting again with another bike unless the Vulcan was stolen (not likely) or exploded.

I usually find another key to lack of boredom is maintaining the bike myself. Except for changing tires, any bike I turn over to a professional mechanic, I will begin to lose interest in. If I can force myself to dive in and do it myself, I have started a long term interest. If only in seeing just how long it can last with my tinkering.

Picture: Jack Nicholson in Rebel Rousers. Dress like that and you will never be bored.
Copyright the Lost Motorcyclist