Global Warming Without the Hysteria 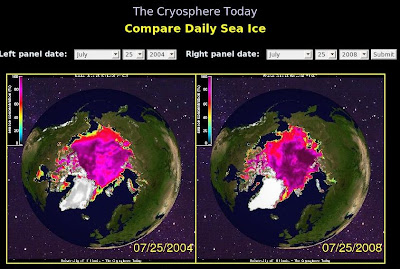 Global warming seems to be on the retreat, if you were to judge by how many clothes I wear when I go out for a walk. Of course everybody knows by now that there is a controversy. The Global Warming Industry is pitted against the oil industry to win the hearts and minds of the SUV drivers.

Who to believe? It seems to me that you can't just poke your nose outside to get the truth. And can you really trust the news? I'm not talking about Fox news, of course, they are clearly biased. And Tiger Woods, you don't believe them either, just stick with your Buddhist religion no matter what Fox News tells you to do.

There is really no trusted independent source of news any more. Well I might be tempted to say this blog is trusted and independent, but I have an obvious bias toward my own blog, so my journalistic integrity stops me from making that claim. I will leave that to others.

Also, studying the science is impossible for most people who do not have the training to analyse the data. So you end up having to trust competing conclusions.

Some pictures that might be worth looking at, that I believe are free of bias, are pictures of the arctic ocean ice cover changing with time, which many people believe is indicative of the current change in our climate. Some think there is more ice now, or that the ice was receding, and now its advancing. You don't need to trust them, you can look at the pictures of Arctic Sea Ice for yourself. And you don't have to look at the dates that are chose by biased sources to prove their own point. Fill in your own two dates and click on "submit". It is "do it yourself science".

What will this prove to you? Maybe nothing. Maybe it will get you thinking that this is a complicated question. Maybe you don't even care if the ice cap is expanding or shrinking. But at least here is one source that I hope we can all agree is unbiased, and maybe we can get away from charges of lying and deception.

Now my own observations are this, and hopefully these are unbiased in any way (except that as Mary Ann says I always look at the "cup half empty").
So based on those hopefully correct and unbiased assumptions, I would suggest we start cutting back on oil use. Leave more oil for the future just in case our descendants need it. At the same time, this is playing it safe with our climate. In my opinion, it is the responsible thing to do, when you strip away all the hysteria.

Please leave a comment below if you think there is anything in this post that is biased or incorrect. All comments are treated with respect, as my only interest is the truth. Personally, I would prefer that global warming was either a hoax or benign. And if global warming did turned out to be a hoax, it would certainly increase my admiration and respect for the oil companies, because that's what many of them have been saying all along.
Copyright the Lost Motorcyclist