How (and why) to Make a Pat Robertson Voodoo Doll 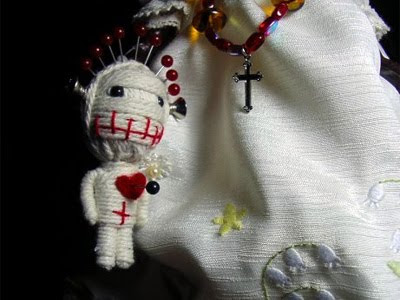 The first step in making a voodoo doll is to get a piece of Pat Robertson to put in a doll (any doll, but a G.I. Joe would be good). Traditionally this would be a hair, a toenail clipping, etc. Even if you are Pat's bodyguard or mistress, you may have trouble getting hair from under the wig which he keeps on at all times. But you don't actually need a physical piece of him. Just print out this blog, which explains a bit of his history, and roll it up, remove the doll's head and shove the paper down the neck. Put the head back on, and you're ready to begin sticking the doll with pins.

Pat Robertson, back in the eighties, wanted to make a little money for himself, and thought a diamond mine in Africa would be a good idea. The country of Liberia, in West Africa is a significant diamond exporting country, and so Pat Robertson looked for a partner in Liberia who could run a diamond mine and share the profits. He somehow became friends with Charles Taylor, a powerful Liberian warlord who was also a "Born Again Christian". Pat Robertson decided that he could trust this man, and gave him seven million dollars in return for a promise of a share of the profits of the mining operation.

Pat Robertson is not in the habit of checking into details too carefully, as you can tell by his poorly researched "true story" about the Haitian Pact with the Devil. If he had done some research on Liberia, he would have found out that even though Liberia is a significant diamond exporting country, they have no rich diamond deposits. Most of the diamonds exported by Liberia are illegally smuggled into the country from neighbouring Sierra Leone. The reason that smugglers go to Liberia, is because it is against the law in Sierra Leone to possess, let alone export, diamonds that have not been mined legally. No such such law exists in Liberia, because they have no history of profitable diamond mining, but have made fortunes from Sierra Leone's diamonds. Today, it is illegal for any diamond cutting firm to buy diamonds that are not documented. But back in the 1990's no such international law existed, and so Liberia continued to export diamonds smuggled from Sierra Leone.

Once Charles Taylor had the money from Pat Robertson he knew that the only way to set up a diamond mine would be across the border in Sierra Leone, which was not possible for him to do legally. He hatched a diabolical plan to send a group of his thugs across the border to clear the civilians out of the diamond area, and create enough mayhem for the Sierra Leone government that he could go ahead with digging up the diamonds without a permit.

The plan was first to clear out the civilian population through terror, and make them flee into the cities far from the diamond fields. While Taylor had enough money (Pat's 7 million would go a long way in Africa), he did not have enough men to carry out the plan. So he decided to recruit young boys in Sierra Leone to form an army.

Charles Taylor's small but well funded band of thugs entered Sierra Leone with the strategy of forming an army of children to fight their own people, and drive the civilians out of the diamond area. The tactic they used was brilliant, though unfortunately it was also a war crime. But back in those days, no evil dictators feared any international court, and Charles was the dictator of Liberia.

The tactic was to go into a village, and round up boys about 10 to 14 years old as their recruits. Most villages in Sierra Leone are totally unarmed, so a couple of men (or even children) with AK47's can easily take over a village. They then lined up the villagers, and forced their new recruits to chop the hands off one by one. Psychologically this was devastating, as fathers and mothers had their hands cut off by their young sons. Usually after most of the hands were cut off, and the soldiers had left with their kidnapped recruits, the entire village would be abandoned. And with each new village, Taylor's small band had a new bunch of recruits that they began to turn into "child soldiers". This training process involved the use of cocaine, beating and torture, usually carried out by the children on each other, with the help of the drugs. Also the children were told they were fighting for Jesus against the evil Sierra Leone government, and that they were on the side of God. With a combination of psychological methods, they could get the children to carry out these village operations almost with no supervision. So the tactic proved effective. The Sierra Leone police and army found themselves faced with an army of drugged up children who were heavily armed, and fearless. Plus, of course some men who were persuaded that this rebellion was an easy way to power and wealth. Millions of people fled, not only the diamond country, but Sierra Leone itself.

The rebellion was actually too successful, it spread right into the capital city of Freetown. The reason I say too successful, is that Taylor did not want to "take over" Sierra Leone, he just wanted the country in chaos so that he could continue to smuggle out the diamonds. But with the success of the rebellion, came a UN team to negotiate a peace settlement.

A power sharing agreement was mandated by the UN, peacekeepers were brought in. Everything should have gone back to normal. But of course it didn't, as Charles Taylor needed the terror to continue. The fighting did not stop, and at one point, a large group of UN soldiers were kidnapped by the drugged up "rebel" forces. If peace had returned to Sierra Leone, it would put a stop to Charles Taylor's hugely profitable diamond operations.

Gradually as the fighting continued in spite of a peace deal, it became clear that this was not a typical tribal rebellion based on some legitimate grievance against corruption in the government. The Sierra Leone army was stretched to the limit. At that point, the British Government, under Tony Blair sent in a commando unit with the stated purpose of providing security for British citizens. When they arrived, the desperate people of Sierra Leone looked to them as their only hope of ending the carnage that was still going on. With the help of the British commandos, and a further effort of their own, they managed to turn the tide. They eventually persuaded most of the child soldiers to put down their weapons. The children, who now were actually getting to be teenagers and young adults, were eventually put into child soldier rehabilitation camps, and with time the refugees that had fled into neighbouring countries started to return.

Pat Robertson never got his fair share of Charles Taylor's profits. But he also never made an attempt to find out what was going on, in keeping with his philosophy of how to attain prosperity.

As the story became clear, and Charles Taylor was discovered to be the culprit, George W. Bush called on Charles Taylor to step down as President of Liberia. Pat Robertson, still loyal to his "Born Again Christian" friend Charles Taylor, rebuked Bush publicly, stating that Bush had no business interfering in the affairs of a sovereign African Nation. But Charles Taylor stepped down, and he was offered asylum in Nigeria. Later on, he was handed over by Nigeria, to eventually be taken to the international court in the Hague, to stand trial for war crimes in Sierra Leone. The trial is still going on.

Read and print this, stuff it in a doll, and you're set to go with the Voodoo curses.

A much more complete, and complicated story of the Sierra Leone Rebellion: