How to Drive a Motorcycle in a Straight Line 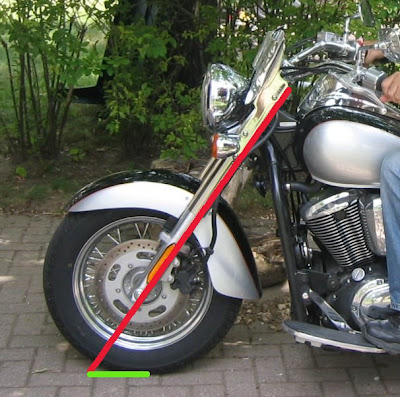 A motorcycle steers entirely differently from a car. A four wheeled car has a steering wheel, which connects to the two front wheels, and turns them with levers. To maintain a straight line, a car needs constant little corrections from the driver. It is obviously not impossible to do, and seems to cause no aggravation to the driver. But when you ride a motorcycle you gradually become aware that most motorcycles need no such constant correction to maintain a straight line. It's almost as if a motorcycle can sense where it is going without any input from the driver required.

The way that a motorcycle maintains a straight line can be explained only by understanding some geometry, but I'll try to keep it simple. The front wheel is set up so that it wants to turn when the motorcycle leans over, which is also true of bicycles. And it may be easier to try this experiment with a bicycle. Stand beside a bicycle without touching the handlebars, and lean it a little to the right. The front wheel will also swing to the right. This action is not a result of luck or anything natural in a two wheel vehicle, it is designed deliberately into the steering by making sure the steering axis (the red line through the steering bearings) hits the ground in front of the wheel's rubber to road contact. This distance (Green line) is called the "trail" and the bigger the trail, the stronger the turning force will be on the handlebars.  The angle of the red line is called the "rake", and together "rake and trail" can tell you much of how stable or twitchy a motorcycle's steering will be.

It may be too obvious to state that a motorcycle has a tendency to fall over. But no matter how basic this fact is, we often forget it when it is so easy to keep a motorcycle balanced at speed.

To understand why the motorcycle travels easily in a straight line, we first need to look at why it remains upright, since that is in fact the trickiest job. If you can just keep a two wheel vehicle from falling, there are lots of reasons why it can go straight more easily than a four wheel vehicle.

Lets start with the idea that the motorcycle is always in a state of falling over, even while driving fast. As soon as it begins to fall to the right, the front wheel turns to the right. You can't detect it, even with your hands on the bars. You can't even stop the slight turning with your hands alone, but you could if you locked the bars mechanically like welding or bolting firmly in place so they could not turn. As the wheel turns to the right, it steers the bike to the right, which instantly straightens the bike up, and the wheel moves back to a straight ahead position again.

The self balancing effect is so precise and small scale, most people do not know it exists. But occasionally it goes wrong. The most spectacular failing of this self steering effect happens when the steering return force is too great. For years this was a problem for manufacturers, as they found it very hard to diagnose. The self steering effect is so small it can be thrown off by looseness of the steering, runout on the wheel rim, or even a minute flexing of the frame. If the return force is too great, the front wheel will turn back quickly, and overshoot the centre, causing an even bigger swing to the other side, where the self steering effect will turn it back to the right again, but further than last time. This increasing over-correction is called a speed wobble. Speed wobbles cannot be stopped by hand, the forces are too great. Once the speed wobble gets to it maximum size, it is called a tank slapper because you will find your hands hitting the gas tank, if you can even hang on. As this point the bike is probably going to crash, so jump off. Just to show how weird the effect is, motorcyclists have often jumped off bikes doing a speed wobble, only to have the bike straighten up and drive off riderless in a nice straight line.

Fortunately, with modern engineering and design, speed wobbles are just about a thing of the past. To experience one, you need a very old bike, or a bike that is damaged or worn out.

Another way to learn something about self steering is to have a bike with seriously flattened steering bearings, where the bearings are also overtightened enough that the handlebars are hard to turn. At certain speeds, you will find the self steering effect has disappeared, and you will be forced to constantly make minute corrections to the steering to stay upright. This is tiring, given the stiff bars. Often riders don't know what has happened, the bike just "doesn't feel right any more".

If the bike is set up right, it will be very easy to guide it in a straight line. It is possible on most bikes to take some gentle curves by slightly leaning your shoulders to the left or the right without hardly touching the bars at all.
Copyright the Lost Motorcyclist