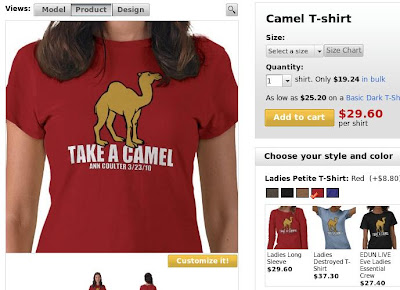 I feel saddened to hear that Ann Coulter was invited to the University of Ottawa and paid $10,000 to speak. It would be OK in a certain context, let's say that she was invited to a closed laboratory and asked to speak in front of experts on mental illness, so that they could do some research on how to stop the spread of Ann Coulter's disease. But not to invite her to speak in front of a crowd of undergraduates including Arabs. That is nothing more than than a setup for the type of freak show that is Ann's bread and butter.

Making things worse, the Provost of the University sent her a letter ahead of time warning her of Canada's hate laws. A better way to handle this would have been to let Ann deal with the laws herself. Or just not invite anyone who needed to be warned. Just imagine the U of O inviting Hitler to speak and sending him a message beforehand saying "Be careful of Canada's hate laws, you could get locked up". The reason you invite Hitler is because of his hate speech, and only because of his hate speech. Without the hate, Hitler is just another Austrian kid that nobody cares about.

The most important thing to understand is that Ann Coulter is not suitable for a University setting. She is not logical, she does not make sense. Instead of paying her money to insult people's religion and race, just get a panel of experts to debate her impact on American society. That would be educational.

I wonder how her next engagement at the University of Alberta will go down. Alberta probably has more Ann Coulter sympathizers than any other place in Canada, I'm guessing.

Picture: T-shirt commemorating Ann's response to Muslim student asking how she would be able to travel with Ann's call to ban Muslims from all airplanes.

Coincidentally, there is a CBC show on TV tonight "Love Hate and Propaganda" about WW2.
Copyright the Lost Motorcyclist