The Basics of Vehicle Rollovers 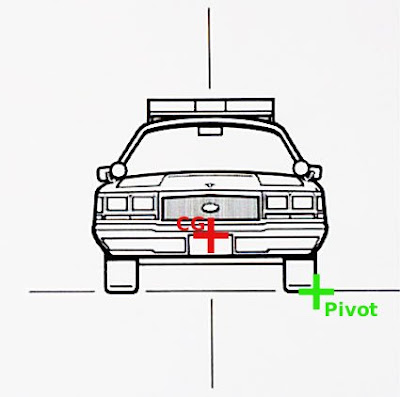 The latest fad towards ever taller cars is the result of a lack of understanding of the physics of driving. It has been pointed out over and over that tall narrow cars tip over more easily than low wide cars. And yet still people buy high narrow cars and drive them at foolish speeds. Obviously we need a refresher course on basic physics.

There is really only one vehicle that can be tall and still go fast, and that is a motorcycle. And that is because the motorcycle leans into the turns. Cars that sit on four wheels cannot lean into a turn and so are vulnerable to a rollover in case the turn is taken too quickly. I think almost everybody knows this rule about tall narrow cars, so let me just add a few caveats to it.

The first caveat is this. Just because you call your car a truck, or even better, an SUV, does not mean it defies the rules of physics. A lot of people who are in denial about the roadholding capabilities of their vehicle think that this law only applies to cars. Just because SUV has the word "Sport" in it does not make that vehicle competent at high speed. And by high speed, I mean a cruising speed for a "normal" low and wide car.

The second caveat is this. You can roll over even on a perfectly straight road. This can happen in any one of a number of ways. First you may leave the road momentarily, getting the right wheels on the gravel shoulder and over correct coming back. Second, you may be hit from the side by another vehicle either in a T-bone or a sideswipe. Third, you may swerve to miss a raccoon in the road. You don't swerve for raccoons you say? OK then child. Fourth, you may get on black ice and spin. I can think of more, but you get the idea.

So now for the physics lesson. Is there actually a law of physics that says a high narrow car will tip over and roll more easily? And is there any way that a car can be designed to be high and narrow but not tip over?

First, lets deal with the concept of "Centre of gravity". In order to simplify calculations on a car, it is useful to find a point where the average of all the mass converges. You can imagine this if you could balance the car on one finger. If so, the centre of gravity would be somewhere on a line directly up from your finger. In order to find exactly where it is on that line, you turn the car on its side, and balance it again on one finger. Now you have a different line through the car, but amazingly, at some point those two lines will cross each other. Where they meet is called the centre of gravity or centre of mass, and it is very useful in determining how the car will act while in motion. By the way, in case you were wondering, this also applies to boats, planes, trains. It does not apply too much to non rigid objects like people, who can change their CG by bending. There are also some cars that can actually change their CG, like the Citreon DS. Also, remember you can change a CG by loading a car. Also, the CG can change if the load shifts, but let's just go with as simple a model as possible for now.

Now look at the diagram, where CG and the pivot are marked. The car will start to roll by rotating around the pivot, in this case one of the wheels, seen from the front (it does not matter which side if they are symmetrical). If the weight of the car is 1000 kg, there will be a force of 1000 kg directly down from the CG, and that will stay the same through the turn. If you are going straight, the sideways or tipping force is zero. This sideways force is called centrifugal force.

Now let's imagine that the car is turning. I don't want to get into a theoretical argument about whether or not centrifugal force does exist. That argument is only for people who have an understanding of physics. For everybody else, the faster you turn the higher the centrifugal force. If you have a whole bunch of cars racing around the same curve at the same speed, they will all have the same "G force". By G force, I mean that if you have a 1000 kg car, with a centrifugal force of .5 G, the car will have a 500 kg force pushing it sideways. If you have a 2000 Kg car at the same speed on the same corner, it will also have a centrifugal force of .5 G, but a sideways force will work out to 1000 kg. for the heavier the car. So you do not gain any advantage by having a big heavy car in going around corners. While you have a heavier weight to keep you down, you also have a proportionally stronger force pushing you out.

The only real advantage you can have in not rolling over, is to keep the CG low compared to the width of the tires.
Copyright the Lost Motorcyclist