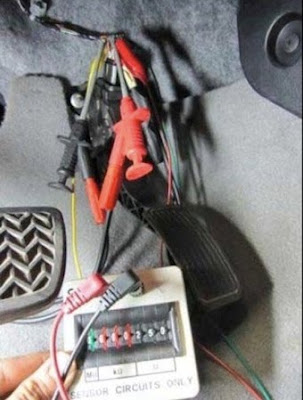 A new argument has come up in the Toyota sudden unintended acceleration problem. (SUI). Professor David Gilbert of Sanford University has found a way to produce acceleration in a Toyota without recording a fault code in the engine. This test was done in a dramatization for ABC News, where it was claimed that this would not happen with any other automaker's fly by wire throttle system.

Toyota came back with results for several other automakers, where they showed that same thing happened on other fly by wire systems.

I'm certainly not surprised, since the way Gilbert rigged the system involved a 5 volt source, cutting several wires and reconnecting them with a specific resistor. In other words, simply reproducing a valid electrical signal to the engine without using the supplied gas pedal.

Toyota also pointed out that Gilbert's research was funded by the trial lawyers hoping to sue Toyota for billions of dollars in damages.

The discussions are found on these two web sites below, along with many comments that are actually more interesting than the work Gilbert did. By that I mean, Gilbert provided some insight into the inner workings of the Toyota engine management system. I did not know that they had a fault code set in case of a short in the throttle pedal, but it's quite logical that there should be one. But it is even more interesting to examine the many "brain faults" in the comments, reminding us that this is still essentially a case of mass hysteria. And even if one day it turns out that they find a real flaw that causes the Toyotas to accelerate, this issue will still be a great case study in mass hysteria, because of the number and variety of flawed arguments being presented.

It is impossible to pick out a typical comment from online readers, but I felt like this one deserved to be printed in this blog simply because the Academy awards were presented last weekend, and I'm in an award giving mood. So this gets the Oscar for most incomprehensible comment in the category of self proclaimed professional expert in the online Toyota SUI debate. It was on the Jalopnik site, and you may have missed it because it was hidden, and also was in reply to another comment about the quality of education at SIUC (Southern Indiana University at Carbondale Home of the fighting Salukis). It is also quite instructive to see how far off topic people can get, but in this case, the name Sanford University carries a lot of weight in the minds of impressionable people, so I guess it was relevant to comment on whether or not Sanford was a legitimate institution of learning because one of the commenters applications was rejected. Also, I don't want to know what a Saluki is.

@beercheck: It is indeed a fine school.

There still is something I do not get, why not reverse the VDC of one of the sensors, or run it through a logarithmic integrator. That way a bunch of this would could be noticed by the ECM. Also both are Hall effect sensors in a non shielded part and could pickup the same interference. Why not shield it or have one sensor be an optical slit counter? Another option would have been to use TP and a serial interconnect with parity, cksum, or CRC.

But my bet is that the trouble was in the firmware of the ECM. My guess is that the error cases were not exercised thoroughly enough in testing. My hunch is that there is a problem where when the ECU gets unlucky and gets an error condition under just the right conditions there is an off-by-one sort of bug in some innocuous error logging code and the ECM goes off into an infinite loop twiddling the word it needs to for the watchdog timer to think it is making forward progress. During this time the throttle is where it last was.

I say this since I had to put in logarithmic integrators, reverse voltage, use optical slit counters, add hardware watch dog timers, use R-485 then safety EPLC that supposedly would bring DACs to 0VDC automatically, and still had to fix a bug much like I described which was finally the actual mistake that cured that blasted system. I do industrial controls software for a living.

There is a possibility that America is approaching a point where buying a car becomes impossible for the middle and lower class. Like health care, where costs went up and access was reduced with the excessive lawsuits against doctors. Today, Americans may think that destroying Toyota will be good for them, but they do not realize that all car makers are in the same boat, and if you can destroy one car maker without proof of a fault, you can do the same to the rest of the low-cost car makers. Every car maker is trying to cut production costs, every one is forced to use electronics instead of mechanical linkages to save money and meet new standards. None will ever make a fool proof car.

There are a couple of other issues also pushing us away from universal car transportation. Running out of oil is one, global warming is the other. And now we can add a few more. Ever more incompetent drivers, greedy trial lawyers, and the never to be underestimated effect of mass hysteria.
Copyright the Lost Motorcyclist