Why Does a Motorcycle Need a Gearbox? 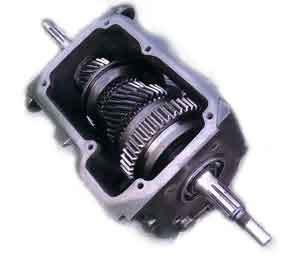 Recently I was quite surprised to find out how many car drivers had no idea what "Neutral" meant on a shift lever, or why you might need to use it. But actually I should have known that some remedial work was needed. After all, there has been this controversy "Torque or Horsepower, which is more important?" going on for at least ten years. If most drivers knew what a gearbox was for, the answer to that question is easy.

Why is it that so many people don't know what gearboxes are for these days? You might blame the quality of education in high school. Or the fact that 80% of cars in North America have automatic transmissions. In either case, a tipping point has been reached, where even if someone tries to explain the function of a device using basic physics, they are no longer going to be understood, and there will also be a large number of people to argue against them. When that tipping point is reached, where you can find more misinformation than truth on the Internet, it's hard to get the knowledge back. I Googled "what is a gearbox for" and couldn't really find anything to explain it, so my usual response is to put the explanation out there myself though this blog.

I have to start with a simple lesson in Physics, don't worry it's short. First a reminder of the law of conservation of energy. No device can create or destroy energy, only convert it from one form to another. A gearbox is a form of simple machine that transmits energy without adding or subtracting from the energy, or converting it from one form to another. So you have mechanical energy going in one side, and the same mechanical energy coming out the other.

Now to answer the question, if a gearbox doesn't DO anything, why do you need it? The answer is that although the total mechanical energy remains the the same while going through the gearbox, something has indeed changed. Mechanical energy has two aspects, speed and force. The engine spins a shaft at a certain speed, and with a given amount of force. You cannot have mechanical energy unless there is both force and speed. Stop turning, and the energy is zero, no matter how much force you are using to hold the shaft still. And you can spin as fast as you like, but unless there is some force to it, the energy is also zero.

The function of the gearbox is to change the amount of force compared to the speed. For example, the gearbox can slow down the shaft to half speed, which doubles the force while the total energy stays the same. Or it can double the speed by cutting the force in half, again without any change to the total energy. So you have an input shaft running at 1000 revolutions per minute with a force of 50 units, and the output shaft from the gearbox might be running at half the speed at 500 rpm but doubling the force to 100 units. Most motorcycle gearboxes have 4 to 6 different gears you can choose from depending on your needs.

Just an aside here, the force of a turning shaft is actually called "torque" and units of force used to measure a turning shaft are typically foot-pounds or sometimes known as pounds-feet. http://en.wikipedia.org/wiki/Torque

Now to get back to the actual use of a gearbox. The gearbox is placed between the engine and the driving wheels of car, to change the speed and torque (force) of the driving wheel as compared to the engine. This is necessary, because the engine cannot go as fast or as slow as the drive wheels need to go. But that's not the only reason. The gearbox is also there because sometimes the engine cannot produce enough torque to move the vehicle, and sometimes it is producing more torque than we could possibly need.

The basic compromise of the gearbox is this: You can get a lot of torque (or force) in a lower gear, but you have to slow down. Or you can go very fast, but not have much torque on the driving wheels.

How would this relate, for example to my Vulcan 900's performance? If I want a lot of rear wheel torque, I would choose the lowest gear possible. So to out-accelerate a Harley Davidson, (for example) from a standing start, I would obviously start with first gear and full throttle. I would hold that until about 70 kph, where I would shift into second gear. As soon as I shift to second, I am cutting the torque to the rear wheel, and consequently I am reducing my acceleration. But I have to shift at 70 kph or the engine will spin too fast. The Vulcan's engine management computer will cut off the engine at about 70 kph in first gear. Other bikes without a rev limiter may simply blow the engine, YMMV. Second gear is capable of getting me to about 110 kph, so I will hold it in second gear until that time. By now, the Harley may be way behind, and a radar trap is up ahead, so the race is over, and I simply close the throttle.

To summarize, you have a gearbox to match engine speed to road speed, and the way you use the gearbox has an important effect on your motorcycle or car or truck's performance. For maximum acceleration, use the lowest gear that your engine can handle without blowing up from over-revving. For maximum fuel efficiency, use as high a gear as possible without lugging the engine (That's the lower limit of the engine's power band)

And why do we have neutral? In case the clutch fails, you need some way to disconnect the engine from the drive wheels in order to stop the bike, so you don't have the runaway acceleration problem like Toyota.

Picture: That's a car gearbox, basically shaft in, bunch of gears, and shaft out. The stick is missing from this picture. You move a stick around to select which gear you want to use.
Copyright the Lost Motorcyclist