Dragging Floorboards, Keeping Up With Harley 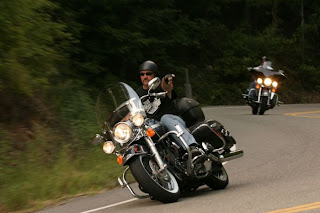 A thread on the "All Things Motorcycle" forum starts off

I've been noticing that I can't seem to keep up with my riding buddies through curves. Whenever I try to keep up by increasing my speed I end up scraping my floorboards therefore I end up slowing down in order to negotiate the turn. At first I thought it was because my bike was lower to the ground (I have a Honda 2005 VTX1300S), but one of my friends has a Harley Softail and he seems to have no problem going faster through the turns. Am I doing something wrong if I'm scraping the floorboards? Is it a matter of technique that I will be able to improve?

Two questions. Your buddy on the Harley, is his name Valentino Rossi? No? Could you keep up to your buddy on a Harley if you were driving a normal passenger car? If yes, then you can be helped.

A cruiser is not designed to go around corners fast, but it can keep up with normal grandma-driving car traffic quite easily, if the rider has any experience. However, the design limit of this motorcycle is its limited lean angle. When a motorcycle leans over so far that the weight rests on some solidly mounted steel instead of rubber, the whole motorcycle will either be levered upright, or it will slide on the steel. Levering upright will make the bike go wide of the turn. Sliding on steel bits lifts the tire off the road and eliminates tracking stability. Then the bike lowsides (falls down into the turn) and then goes wide of the turn just because objects tend to go in a straight line when there is no rubber on the road.

It is not a good idea to push the cornering limit on a cruiser, if you don't know what you are doing. It is also bad to push the cornering limit on a sport bike, but that is usually done on race tracks, a safer location for many, many reasons. And I'm not talking about wannabe racers on sportbikes. I mean riders who really can go fast enough around a corner to push the sport bike's performance envelope. That is insanely fast. Riders who don't practice on a racetrack, do not have the skill to push a sport bike's limit on the road. They will crash long before the bike reaches its limit.

Don't ask me why, but cruiser riders never take their bikes to a racetrack to push their limits. What's wrong with pushing the limits of a cruiser on the road? You will crash into oncoming traffic or into a solid object like a tree if you exceed the bike's limit. And yes, even a moderately skilled rider can push the cornering limits of a cruiser. When you hear that floorboard scraping, it is a warning that you are approaching the limit. While the floorboard will fold up, if you lean it much more, a non-folding item will become your main contact with the road, and then you will crash. Probably into something hard.

You are puzzled by a friend on another type of bike who can corner a teeny bit faster than you. Let me clear that up. Every cruiser has slightly different cornering clearance. Put it another way, it is perfectly normal for each bike to have a different angle that it can lean over before scraping. In case you were wondering, there are no government regulations that say a motorcycle must be able to corner at a certain speed. So there is your answer. Every bike has a different limit. You are probably riding with someone who has a faster bike. Get used to it.

But given that you are slower than a Harley, this could be a hazardous situation, so I am willing to give you a few pointers in case it is indeed your technique that sucks. You can actually learn how to minimize scraping in the corners. All the riders I see scraping floorboards are sitting upright on the bike, letting the bike do all the leaning, while they do none. The answer is to learn how to lean your body into the corner, which takes skill and practice. I will just cover a few of the main techniques. First you must learn countersteering and use it. Once you know how to countersteer, lean your upper body with the bike (or even further). While leaning your body, keep your head vertical using your neck muscles, because keeping a level head is how you maintain your balance and perspective. That's why it's called "Keeping a level head". If you need a little more clearance, you can hang half your butt off the seat on inside of the corner.

I mentioned countersteering, which is necessary for you to keep the bike leaned over to the correct angle. It is also very useful if the bike scrapes something hard on the ground and stands up, because countersteering will allow you to lean it back over immediately and maintain your line. Countersteering also allows you to apply the brakes while leaning over, which is another thing that can stand the bike up. Countersteering is a huge safety factor while cornering, in my opinion it is a basic necessity of life.

I forgot to mention about the passenger - they can throw off your balance, so I would leave them at home. And don't take this "hanging off" technique too far, or you may end up losing traction, because typical cruiser tires are not very sticky either.

There is another approach to take when trying to keep up to another bike. You will find that by taking it easy in the corners, and not touching down, and keeping a smooth unhurried line, through the corner, you will actually be going faster overall and scraping less. But every time you rush, and overdo it, you lose momentum, make corrections and fall further behind.

Something I have not really talked about yet is braking and accelerating, because I rarely do that while riding on twisty roads. But if I was trying to keep up with a really fast rider, who is faster through the curves than me, I would brake harder and later for the curves. And I would shift down and hit the gas full on as soon as I am straightened out after the curve. But because this is not a race, I could ask the other rider to try to keep a steady speed, to not speed up between the curves. That gives each of us a chance to take the curves at our own speed, and I will be able to close the gap on the straights. And of course, if he does not want to keep a steady pace to let you catch up, then you need a new riding buddy, or a new bike.

Picture: First of three pictures off the page mentioned in this blog. What do I see here? Wearing a t-shirt, jeans, fingerless gloves, beanie helmet is not going to provide much protection in a fall, and would not be allowed on a race track. One hand off the handlebar while leaned quite far into the curve. From this angle, it is also possible to see the rider is not leaning to the right with the bike, and is sitting more or less up straight. The other two pictures I linked to, show the same rider possibly in the same curve, scraping the underside of the bike, sliding and falling off.
Copyright the Lost Motorcyclist