A Bike Puts a Smile On Your Face and Has Character 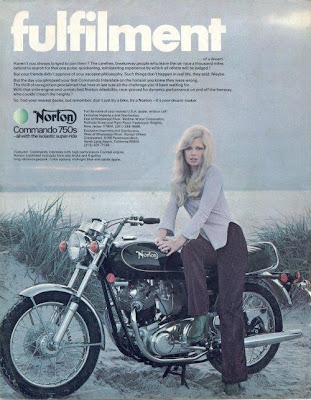 The most overabused phrases in motorcycle testing are "it puts a smile on your face" and "it has character". Not that I want to be a curmudgeon, but this is just another way of saying about a motorcycle "I did not pay for this bike" and "it breaks down a lot". The equivalent overused phrase in music is "It has a beat and you can dance to it."

Actually about the only time I really feel like smiling is when I see some crazy bike out there that seems to have a story that needs to be told, by an even crazier rider. (I mean crazy in a good way). Like yesterday. I was on the 13th annual Malt Run, a ride set up by a bunch of friends, and we were coming out of a restaurant at Teviotdale. The roads were full of motorcycles, with the nice weather we were having. Then a guy an an old Norton Commando painted flat black pulled in, parked next to our bikes, pulled off his helmet (also old style) and asked the way to Sauble Beach. Luckily some of our group carry old fashioned maps, instead of pre-programmed GPS routes, and so they could help him while I took the time to look over the bike. The stuff I notice most on old non-Japanese bikes is stuff that is not there. Like no puddle of oil under the bike. For some reason, this bike was oil tight, which seemed interesting. So I asked him if he had any reason to believe this bike could actually make it all the way to Sauble Beach. He replied that with all the money he had spent on oil seals and o-rings and top end rebuilding, it should be able to go all the way to the "F****** moon", and that he would not have any hesitation to drive it to Vancouver. (for those of you not from Canada, that is a long way when you are starting in Teviotdale.) Just then I realized that his licence plate was from Nova Scotia, although it looked so much like an older Ontario plate that I missed it at first glance. Actually I only noticed it when I was looking at the weird official stickers on the plate. I asked if he was from Nova Scotia, and he said sort of, but he and his wife were actually living in a motor home, so they kind of moved around and trailed the bikes behind them. I guess he was using Nova Scotia as a flag of convenience, and I also assume the tax rates and insurance rates are less there than other places like Ontario or Quebec.

When I was talking to this character, I was reminded of the Canadian movie last year featuring a Norton Commando travelling to Vancouver. It was called One Week. (I also did a review of the movie "Commando", but that one strangely didn't have a Norton Commando in it.)

In a couple of weeks, the Paris Vintage Motorcycle show will be on, and it is just chock full of bikes that have character. That's why I often go two days and pay twice, and feel lucky to be living in Kitchener, which is such a comparatively short ride away. http://www.cvmgparisrally.ca/

Picture: The Commando as new, sorry I didn't have my camera with me at the restaurant. But to imagine it today, simply add two really really beaten up natural leather saddlebags, a flat black paint job, a sex change operation for the girl and a black t-shirt and jeans, and an old helmet. And take away the platform shoes.
Copyright the Lost Motorcyclist