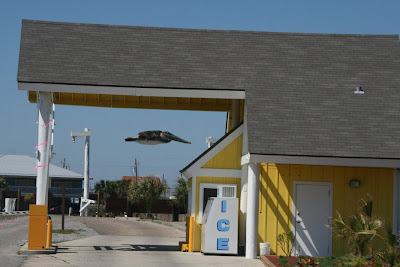 I have to admit that we visited Grand Isle by car, not by motorcycle. But many of my trips, even by car, have a motorcycle-like itinerary. For example, I have driven "The Tail of the Dragon" by car as well as by bike. And as a motorcyclist I still have an eye for motorcycle friendly places, even when I'm in a car.

This trip was 2004, but the reason I'm writing about Grand Isle today is that I saw it on the news this morning, with oil coming up on the beaches. In the six years since we went there, we have seen Grand Isle in the news twice, once for the oil spill and once for Hurricane Katrina, which wiped out a lot of it. In fact I was surprised the Island still is there at all, for all the grief it's getting.

Our trip to Grand Isle in November 2004 was almost accidental, as I never heard of it before I arrived at the tourist welcome station where I55 enters Louisiana from Mississippi. We were looking at their map for a place to pitch our tent, when I saw way down at the bottom, about as far as you can go, Grand Isle state park with tent camping. The location on the map alone was appealing enough for both of us to decide immediately we would drive there and camp for a few nights.

The road to Grand Isle passes through Cajun country in the Mississippi delta, which interested me because of my own "Cajun" background. A lot of people don't know that the word Cajun is from "Acadian", and these French speaking people were deported from the Atlantic provinces in Canada by the British in the 1700's. My family apparently escaped the British when they came for them with a free one way ticket to Louisiana. Although the French language is gradually fading, there is still a lot of French spoken in this part of Louisiana, and when we stopped at a bank, the young woman who was our teller spoke English with a slight French accent. I asked her is she spoke French and she said no, she only ever spoke English, which I found kind of interesting, from a linguistic point of view.

Getting to the park, we had to drive right through the town of Grand Isle, and in the middle the speed limit was only 20 mph. Seeing a woman on a motorcycle pulled over by the cops made me extra cautious of my speed, which was a good thing as I found out later from some locals, the policeman was on a rampage, ticketing everyone who was even a few mph over the limit.

Arriving at the park gate, I was asked if I wanted to pitch my tent on the beach. Of course I did. Camping on the beach is a big favourite of mine, when it's allowed. At Grand Isle it was perfect because you could also drive your car onto the beach, many beaches have sand that is too soft for cars. As we were pitching our tent, a woman arrived alone on her motorcycle and put up a tent on the next site. Her motorcycle licence said Minnesota, and she was the same one who was being hassled by the fuzz as we came through the town. She had actually left her bike in the official parking lot because she was afraid to ride it on the sand. But later on I saw other motorcyclists driving on the sand, and it seemed to be quite easy except for a very short stretch where you first crossed onto the beach from the parking lot. There, the sand was loose and one guy almost lost it while he was gunning the engine to get up the hill.

When Mary Ann and I camp, it's very minimal, like motorcycle camping. We basically have a small tent and sleeping bags, and hardly any cooking stuff. So we drove into town to have our meals, or coffee or pick up a few groceries like cereal and milk. We found the Conoco station was the best place to go for hot coffee and a muffin. Like most of the new part of town, it is built on stilts, so that hurricanes and tsunamis won't wash it away. Only the actual gas pumps are on the ground.

It was pretty obvious that oil was the big industry around there. Although we could only see a few rigs in the water, there was the constant drone of supply helicopters overhead. And there was nearby Port Fourchon a busy port for oil supply boats. There, we drove down to the beach on a Saturday and saw lots of people driving their cars on to the beach and going for miles to find a fishing spot, so we did that too, just to see what was there.

One of our most memorable experiences was visiting a local tourist attraction, a butterfly house. The attendant asked us if we liked to go sailing, and we ended up going sailing with a couple of people from the local area. It was interesting to talk to them about the town and their state, and while we were sailing, dolphins followed the boat out of the marina. Mary Ann was trying to get a picture of the dolphins, but it was hopeless because our primitive digital camera had too much time delay to catch them before they went back under the surface. We have a newer camera now for that reason.

Picture: The gate to Grand Isle State Park with a pelican. I took it off the website in the same link as above , where you can find lots of other pictures.
Copyright the Lost Motorcyclist