Science and the Art of Motorcycle Troubleshooting 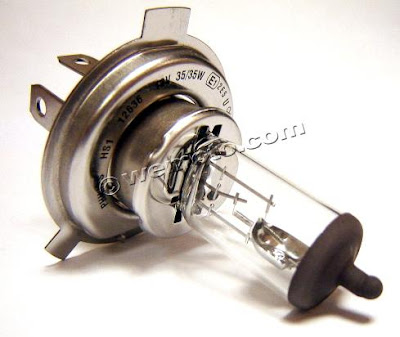 To put it in scientific terms, I believe Mary Ann's Burgman 400 has been cursed by Satan. I have observed that in the rare situation when you really want to ride it, and none of our other modes of transportation will do, it won't go. Since we have a car and three other working motorcycles, plus bicycles, there are not many times when you really need the Burgman. But when Mary Ann has promised to give someone a scooter ride on a particularly nice day, the scooter has once failed to start, and once had a flat tire.

So last night we were about half way home from my mother's, the sun was setting, and suddenly Mary Ann pulled into a parking lot to ask me to check the headlights. Both low beams were dead, but the high beams were working. We decided to go the rest of the way on the high beams, and worry about the low beams tomorrow.

As we were riding along with the high beams alone, I was already starting to kick my mind into gear to fix the problem. Obviously, there was no way both low beams would burn out at exactly the same time, it had to be a short somewhere in the wiring harness. And since the Suzuki is covered with body panels, this was going to be a major job stripping the machine down to its frame and tracing the low beam wires from end to end to find the problem. I also considered trading the Burgman in on another scooter, and let somebody else pay for the repair.

The next morning, I was able to actually start the troubleshooting process, instead of imagining apocalyptic scenarios for the bike. Step one in the scientific process is now "Google". My first hit was the infamous "sticky starter button". Apparently, the starter button also contains a "headlight off" button, which when pressed will start the bike and turn off the headlights temporarily to save electricity for the starter. And this button sometimes sticks and the lights stay off. But because Mary Ann's high beams are working, that hypothesis is eliminated.

Second hypothesis: Burnt out fuse. The fuse is not hard to get to, although tools and one body panel are involved. I was surprised that the low beam fuse in the Burgman was 15A, while the spare fuse was 10A. They are supposed to be the other way round. Obviously a previous owner had tried pulling a little switcheroo on their own. Anyway, after testing with a multi-meter, and swapping fuses around, it was proven to not be the fuses either. Doomsday panic was fast setting in.

Third Hypothesis: Burned out headlight bulbs. This, of course, is impossible. How could both headlights burn out at the same time? After five years and 21,000 km, it seems like one in a million. Also, the bulbs are hard to get at. So I was contemplating dismantling the headlight dimmer switch next and looking for loose wires.

I found some instructions for changing headlight bulbs strictly by feel, as you cannot see what you are doing, but you can reach in. So I managed to get the bulb out and test it. It seemed to have no current flow on the low beam terminal. Because there are three wires, I had to find out by research that the black wire with the white stripe is ground, and the yellow is high beam, and the white is low beam. Also, I have a 12 volt electrical tester probe, and when I poked inside the socket, it lit up when I turned on the low beam. So apparently the one in a million chance actually happened. The headlights had burned out.

I went over to the Parts Source to see if I could find one of these unusual looking 35/35W HS1 bulbs, but they didn't have any. The parts guy was quite helpful, explaining how two low beams burn out at the same time. Apparently it happens a lot, not because they burn out together, but they burn out at nearly the same time (within a few months), and the owner does not notice the first one until both lights are gone and other drivers start flashing their lights at them.

Problem solved, so to summarize the scientific steps to solving the problem. By the way, these steps work for anything from the Suzuki Burgman
lights, to getting my mother's DVD player working.

1. Notice the problem
2. Get the bike home (In case of a TV it is likely already home)
3. Imagine all kinds of worst case scenarios, then forget them
4. Look up stuff on Google ("suzuki burgman" low beams burned out).
5. Start making observations, possibly write them down if you have a bad memory
6. Refrain from ripping out the guts of the bike if at all possible
7. Re-examine all your beginning assumptions about the problem.
8. Get the right tools (multimeter for testing electrical problems, axe for removing battery)
9. Consult the manual if you must
10. Talk to the person at the parts counter, you may get some ideas.

And when your part arrives, and you go to pick it up, please take the old one along, and compare the two of them before taking the new part home.

Speaking of parts, I telephoned two Suzuki dealers and got prices between $45 and $34 for the bulbs, but my local Suzuki dealer had a really excellent parts person who found me an aftermarket bulb for only $14, so I ordered two. When they arrive, we'll see if they work, of course.