What is the Real Message of Liberation of Holland? 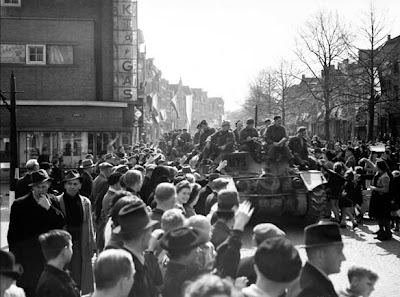 From the Calgary Herald

The resulting "Canadian summer" and the accompanying celebrations solidified a friendship between Canada and the Netherlands which has never wavered in the ensuing decades.

At a time when Canada's efforts to bring freedom to oppressed peoples are viewed with hostility and suspicion by some, it is inspiring to look back on a time when the nobility and dignity of this work was appreciated at face value.

From the Toronto Sun

And a bit of history from the CBC. (click on this link)

Now back to my own blog. As many Canadians are aware, Dutch people are grateful to us for liberating them from Nazi oppression. The Dutch send Canada tulips each year, and hold memorials for the fallen in the Netherlands, where many are buried. Surviving Canadian veterans go over to the Netherlands each year to take part in the ceremony.

Also, during WW2, Canada acted as a home for the Dutch Royal Family in exile, and when Princess Margriet was born here, Canada declared a small part of Ottawa to be Dutch territory, so that the royal child could be native born. This is also part of the folklore now.

I feel a connection to all this outpouring gratitude and remembrance myself, my father fought in Holland in WW2. I am married to the daughter of Dutch immigrants to Canada following the war. I'm not sure how much gratitude she feels towards me personally about this, probably not much. She barely remembers that I lent her my raincoat two days a ago when were were caught in a rainshower during a walk. And she knows for sure I was not doing any of the fighting or liberating of Holland.

My father never spoke much of the war, but he had picked up a phrase in Dutch, which he liked to repeat randomly. It was something that was often said to him when he met Dutch people during the war. "Nix in de winkel, all ist kaput." I don't know Dutch, so that may not be an accurate spelling. Now that I am married to Mary Ann I know it means "Nothing in the shops, everything is destroyed". I used to think winkel meant window, now I know it means a shop.

So the celebrations continue again this year, I think it's the 65th anniversary. Little kids sing O Canada in Dutch. It makes you feel proud to be a Canadian. Sort of.

I certainly know that I didn't do anything to deserve any praise, I wasn't even born. But like the Dutch, I also feel gratitude towards the Canadians that served in Holland.

Canada, and Holland have both changed a lot in all that time. Very few of the veterans are still alive, my father for example died 16 years ago. Over a million Canadians today are of Dutch heritage, boosted by a large wave of immigration after the war. Many more millions are immigrants from other places since WW2, as Canada has become one of the world's most multicultural nations. The Netherlands also has accepted immigrants since WW2.

I noticed on the CBC coverage of this event this year that the Canadian high school students who went to the Netherlands for the ceremonies are from visible minorities, black, Asian, Muslim, maybe others.

Something is changing in all this. I think the Dutch attitude seems to be swinging toward making this an annual celebration of peace, and a condemnation of war. I don't think it is all about gratitude towards Canadians any more as it might have been in the beginning. If I understand right, this has become for them a celebration of peace, not war.

I'm not sure all Canadians get this subtle change, especially our compatriots at the Calgary Herald.

"At a time when Canada's efforts to bring freedom to oppressed peoples are viewed with hostility and suspicion by some, it is inspiring to look back on a time when the nobility and dignity of this work was appreciated at face value."

This is pretty obviously a dig at anyone opposing Canada's military campaign in Afghanistan, written by a person who supports militarism "at face value" and without "hostility or suspicion".

Let us also never forget that the Germans who invaded Holland were also told by their superiors, that this was a goodwill campaign to "Liberate" the Dutch people from their royal family, or the Jews, or whatever.

How can you tell the difference between a campaign of liberation and a campaign of conquest? Not easy, for people who cannot recognize propaganda. OK, one clue would be the number of Canadian soldiers killed by the Dutch during the war, which I have not looked up, but it was pretty darned few. And apparently my father could wander around Holland freely, talking to Dutch people without getting shot by a Dutch sniper or blown up by a Dutch suicide bomber, or getting an axe planted in his head.

Wake up, people at the Calgary Herald. The message the Dutch are passing on with this celebration is that we, (and we means everybody), must never again accept the propaganda of war "at face value". I don't believe their message is actually "Support the troops" without question or suspicion. The Nazis had troops too, and they were viewed with suspicion and even some hostility. 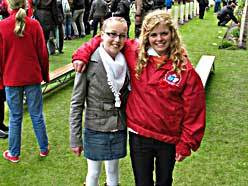 A quote from these ceremonies, for the children “If you keep on helping each other as children, also when you are grownups and together are the boss of this country, then we will keep the peace.”

Picture at the top: A crowd in Leeuwarden, The Netherlands welcomes Canada's Stormont, Dundas and Glengarry Highlanders, 16 April 1945

Picture at the bottom, a Dutch and a Canadian girl celebrate something. Peace maybe?
Copyright the Lost Motorcyclist