Who is to Blame for the Oil Spill? 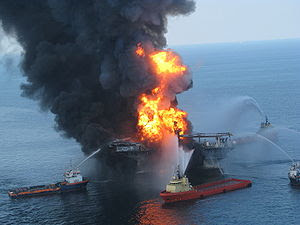 Deepwater Horizon was a "dynamically positioned" oil platform, which is actually a floating platform controlled by computers and positioned by propellers to maintain a steady position. This is what caught fire on April 20, 2010, and sank two days later, and resulted in the oil spill currently messing up the Gulf of Mexico off the coast of Louisiana.

So much for facts. Now let's get on with the mud slinging. In the absence of any conclusive evidence, many people are wondering who is to blame. Here are some of the players/suspects.

1. BP (British Petroleum) An oil company that thankfully is not Exxon or American, to take the blame.

3. Barack Obama, as Anti-Christ-in-Chief he must share some blame, especially after making plans to increase offshore drilling, and making statements about how safe the technology now is. Also, this is now being touted as "Obama's Katrina" by many conservatives, and also by Greenpeace.

4. Sarah Palin, was the inspiration for motto of "Drill, baby, drill" (although she was thinking of the Arctic near Alaska, but the principle is the same.)

5. Halliburton. Was doing the drilling, ex-company of Dick Cheney.

6. Environmentalists. Rush Limbaugh came up with the idea that maybe environmentalists sabotaged the rig. It was spread to Fox News by Dana Perino (Former Bush administration Press Secretary). The idea being, that since the Deepwater Horizon caught fire near to Earth Day, that the timing indicates it may be a plot by wacko environmentalists, with the goal of creating a such a disaster as to put an end to offshore drilling for all time. Although oil platform experts doubt that even Greenpeace, with their vaunted scaling capabilities would be capable of getting on to an oil rig unnoticed. But who knows? Some people think environmentalists are wackos. Some people (yes, including me) think Rush Limbaugh and his followers are wackos.

In the end, this may be a big enough disaster to do for offshore drilling what "Three Mile Island" did for nuclear reactors in the USA. At the very least it may persuade people that offshore wind turbines are not as ugly or as dangerous as they have been made out to be.