You Can Learn About Motorcycling From Mr. Miyagi 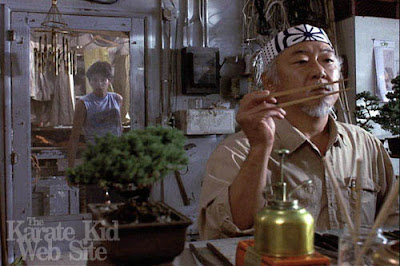 On my website I have a statement "Everything I needed to know about life I learned from a Honda gas tank label". Of course, I was kidding.

Let's start with Karate Kid IV. Riding a motorcycle, like karate, is dangerous especially when you take it to the streets. Threats are everywhere, and to stay safe you need a combination of technique and a sixth sense. Not to mention an ability to remain calm, and to respect the traffic around you, to stay focused, and to be always in control of the situation. Another similarity to the Karate Kid, is that you will generally have four or five opponents against one, and you are by far the smallest out there.

In Karate Kid IV, a small elderly Japanese guy named Mr. Miyagi takes it upon himself to train a girl named Julie in the ways of Karate. There is a lot of Zen involved, and enigmatic instructional techniques. You don't, for example, learn to kick a bag. You learn to "be the bag". Similarly, you cannot learn how to drive defensively, you must learn to "be the traffic". In the movie, this technique of learning and teaching works miraculously for anything, including bowling. A group Tibetan monks who have never bowled before (I assume from the context, but it was never explicitly stated) get in a bowling match for money and win the game easily because of their superior mind control of the ball. They can even get a gutter ball to score a strike.

Many lessons are accompanied by puzzling sayings such as "Ambition without knowledge is like a boat on dry land." That one almost makes sense. But the next one does not "Sun is warm, grass is green." Not at my house it isn't.

These are quotes from Mr. Miyagi again, about traffic conditions and other things, though the dialogue is actually from the first Karate Kid Movie and was not repeated in movie IV, so I put it here


Now for motorcycle maintenance, inspired by MacGruber, a film from the Saturday Night Live skit, based on a parody of a character from the TV series MacGyver. In the original series, MacGyver was always getting out of trouble by making complicated devices out of house hold materials. MacGruber made this funny (or funnier) by exaggerating it out of all proportion, and also having the device fail most of the time in a massive explosion. OK so this is the lesson I got from the movie. Making stuff out of crap is a lot cheaper than buying accessories at the motorcycle shop. Just make sure they don't fail on the road or it's going to be embarrassing.
Copyright the Lost Motorcyclist