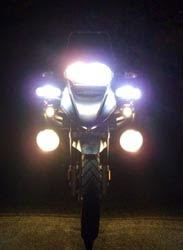 Apparently May is motorcycle awareness month, although it would be a mistake to think that motorists are more aware of motorcycles this month than other months.

Here is a quote I took from this accident report.

"The northbound motorcycle riders wore helmets, and the driver of the southbound semitrailer truck wore a seat belt, the patrol said. The crash remains under investigation."

There is so much you can figure out just from that very simple sentence. Of course, you can't tell all the grief and suffering that will result from this one moment in time, you can pretty well figure out that no matter what kind of helmets were mentioned, that the two on the motorcycle will be dead, and probably the truck driver would survive, with or without the seatbelt.

Here is another article about motorcycle awareness month.

In this article, there was a brief mention of the responsibility of the motorcycle to be visible to other motorists. Well, I do have my very bright fluorescent jacket. But as was mentioned in the article, cops wearing high visibility vests get killed by accident, and they have the lights on the car flashing that can be seen from four miles away.

There is a down side to my fluorescent jacket, it sometimes attracts too much attention. Once, I caused a commotion when I was mistaken for a traffic cop when I was trying to put money in a parking meter. Second, I am too scared to ride into Toronto during the upcoming G20 Summit for fear of being Molotov cocktailed by the protesters who might think I am the riot police.

To be visible, some other motorcyclists buy extra headlights, and ride with three headlights on all the time. But then if the glare from the two outboard extra headlights masks the flashing turn signals, is that any safer? Some bikers use "flamethrower" headlights that are so bright they turn night into day. But is it really such a good idea to blind oncoming drivers at night?

As I said in one of my earlier blogs. Or actually I guess it was Mr. Miyagi who said it, "Balance is everything". It also works when you are trying to be visible to others.

Picture: from this page on motorcycle lighting
Copyright the Lost Motorcyclist