The Debate on Health Care for Palestinians 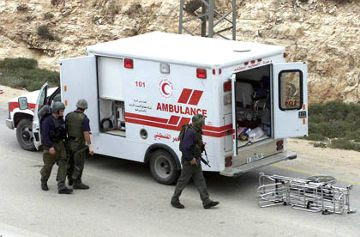 Today I came across a news article in the Jerusalem Post about a conference in England about health care for Palestinians under occupation of Israel. It was titled "Oxford U. blames Israel for poor Palestinian healthcare". In this article, several issues came up, that may not have been well known before, and perhaps merit some attention.

First, a little background. Since 1967, Israel has occupied the Palestinian territories. The living conditions of Palestinians have been a concern to many people around the world. Even those who are not Palestinian themselves have this feeling, fuelled by news reports from some sources. Is there any truth these allegations that Palestinians receive poor health care? This article in the Jerusalem Post could shed some light on the matter.

Just to clarify one point, and this comment was also made on this website, it was not actually Oxford University that hosted the conference, it was the "Society for Medicine".

So on with the facts. The conference, "Healthcare Under Siege", described itself this way

“In this conference, the speakers will draw on their personal experiences in the occupied Palestinian territories to expose the devastating effect of crippling economic blockades and military attacks on civilian health and access to medical care in Gaza,”

You can already tell there is going to be Israeli-bashing in this conference, from the words "devastating effect" "crippling blockades" "military attacks on civilian". And the Jerusalem Post also points out that George Galloway will be attending, a British politician who is famous for bringing relief supplies to Palestinians, and is very outspoken in his criticism of Israel and the USA.

But because the article is actually in a Jewish newspaper, naturally there are also some nice things to be said about the medical care Palestinians receive from Israel. Although I do not think these statements were made at this conference. I will try to summarize them here anyway.

Lord Leslie Turnberg, former president of the Royal College of Physicians, and has visited two hospitals in Israel, made these comments for the Jerusalem Post

Also quoted in this article, is David Katz, professor of Immunology at University College London, speaking about the "Health Care Under Siege" conference. Although he was not quoted about the actual health care of Palestinians, he was quoted about the credibility of the panel.

“Unfortunately, this panel does not inspire confidence and suggests a propaganda publicity stunt. Surely an eminent epidemiologist like Sir Iain should be circumspect about associating with George Galloway, or indeed with Dr. Horton, whose poor track record of judgment on the MMR [Measles, mumps and rubella] vaccine saga speaks for itself.”


How can we interpret these pro-Israeli comments? Well for one thing, we seem to be missing all the anti Israeli facts, if there were any presented at this conference. Such as what is the relative survival rate for infants, and all the other yardsticks by which we usually measure health care. Not being there myself, I cannot even know if these Palestinians in Israeli hospitals were getting their health care for free or if they were paying for it. I know that in Canada, we make Americans pay.

It may be true that Israeli Hospitals don't discriminate, but it is also true that Palestinians get discriminated against at checkpoints on the way to the hospitals. I would like to know if an Israeli checkpoint would ever let a Palestinian ambulance through in an emergency.

Hadassah hospital is supposed to have saved the life of a suicide bomber who killed hundreds of Israelis.  Obviously, if a suicide bomber is still alive, the Israelis are going to try to save his life for security reasons, so that they can interrogate him, and get valuable information to prevent it from happening again.  This is not really a humanitarian issue, and says nothing about the general health care of Palestinians.  It's more of a reminder that any Palestinian may also be a suicide bomber.

I would have to say, that in the balance I found this article quite unconvincing in presenting a case for Palestinians getting "first class medical attention", although I can well imagine that if a Palestinian could get into a Jewish hospital, they would be taken care of as human beings, and not made to suffer. Just like me in an American hospital.

Picture: Palestinian Ambulance being checked out by Israeli soldiers. Problem? There may be a bomb on board, which sadly is a possibility with all Palestinian ambulances. One of the many actual problems of health care for Palestinians.
Copyright the Lost Motorcyclist