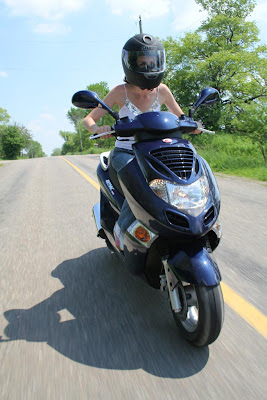 Yesterday, I rode the Honda CD175. And for the first time I was riding with someone on a smaller bike, a Kymco "Bet and Win 150". It was also good opportunity for a comparative road test.

The Bet and Win is almost new, no more than a couple of years old with less than 1000 km on it. It's a single cylinder four-stroke engine with 12.2 horsepower, liquid cooled. It runs on 12 inch wheels, and has a CVT (continuously variable transmission).

The Honda is forty years old technology, nobody will ever know how many miles on it, because so many parts have changed (including the odometer that records mileage). A twin cylinder four stroke engine with 15 horsepower, air cooled. It runs on 17 inch wheels, and has a four speed gearbox.

Both bikes have kick starters. But because the Kymco has a good 12 volt battery, it's kick starter is only for emergencies. The Honda, with a 6 volt system, only uses its electric start for emergencies. Even though the Honda had been sitting for several weeks, it fired on the second kick, a pleasant surprise.

The Kymco is technically a Chinese bike, but it is not really part of the current flood of new inexpensive scooters and motorcycles coming from China, as Kymco is based in Taiwan. They started as a company manufacturing Honda parts, and in 1970 built their first complete scooter. That was the year when my CD175 was new.

Our ride starts with the first comparison between the two bikes, the luggage space. I remove my baseball cap to put on my helmet, and there is no place on the CD175 for a baseball cap. The Kymco has a rear trunk, as well as underseat storage, so we both throw our hats in the Kymco's rather large trunk.

I drive without my headlight because the Honda was manufactured in 1969, and Ontario considers that the last year motorcycles are allowed to turn off their headlights for driving. The Kymco is designed to run with lights on all the time. So it's a bit safer, not to mention having two hydraulic disk brakes compared to my pathetic drum brakes with single leading shoe (both front and rear). You may well ask, what is a single leading shoe? Most people don't care how drum brakes work any more. If something has a drum brake today, it's mostly for show and to cover off legal requirements. So getting back to the leading shoe, it does not mean I have to drag my feet on the ground, although it might help. It just means that the brakes are harder to apply than a double leading shoe, as if I needed any more problems.

Our route to Paris follows a lot of back roads, as neither one of us wants to tangle with the freeway (yet). As we ride along it occurs to me that what we are doing is called "impromptu street racing" in the provincial police rule book. That is, two motor vehicles, travelling together, both going as fast as they can. 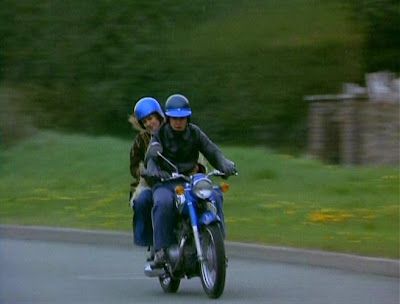 At some point we stop to discuss whether either one of our motorbikes are likely to blow up with this kind of abuse, and decide the bikes can handle it. So we take off once more to see which is faster on an uphill run into the wind. In spite of the slightly lower horsepower of the Kymco, it wins the bet, and reaches the top of the long uphill first. That could be partly because of the liquid cooling, but more likely because of the CVT, which always has the engine right spinning in the power band. On my bike, there is a significant gap between fourth and third gear, where I am producing less than 11 horsepower.

So now we have technically violated the law, but not broken the speed limit. Racing is actually a very natural activity, that continues regardless of police enforcement all over the world. The real problem is in giving young people with no experience, a vehicle capable of 300 kilometers per hour. The entire danger of street racing would be nullified if kids (and some irresponsible adults)were allowed to drive only 50 cc mopeds or scooters. That's how they do it in some countries.

Pictures: I forgot to bring my camera, so that is not my friend on the Kymco Bet and Win 150, although I probably would not object to losing that race. Also, not me on the CD175. Both bikes, by the way, are capable of carrying a passenger.
Copyright the Lost Motorcyclist