The Bikers' Guide to Hamilton, Ontario 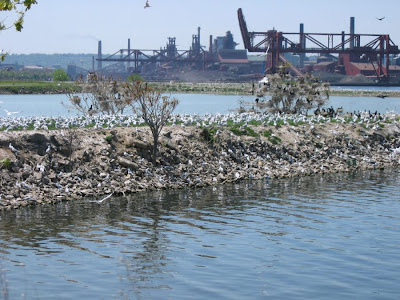 Hamilton has long been overlooked as a tourist attraction in Ontario. It has about the same notoriety for Canadians as the state of New Jersey has for Americans. Hamilton is a steel mill town, big steel mills. The steel mills are not hidden from tourists, they are visible from just about anywhere you go in Hamilton. There is not a single beautiful vista where your senses are not assaulted by sheer steel mill. And if you go back more than twenty years, Hamilton harbour and its air were kind of polluted also. But today you don't have that feeling of gritty pollution everywhere, although you still see the steel mills. Today Hamilton is fun to visit. It is partly big city, partly funky urban landscape, partly lake Ontario beaches, partly mountain vistas. And still pretty much undiscovered and unspoiled by tourism.

I decided to do a one day tour starting from Kitchener, that would loop around Hamilton Harbour. Starting from the Townline Road exit in Cambridge, visiting the Lasalle Marina in Burlington, crossing the lift bridge under the Burlington Skyway that crosses the harbour opening, going into downtown Hamilton on James and King, then on to Dundas, before returning to Cambridge on Highway 8.

It's a kind of challenging route, mostly because of traffic. I did it starting at 11 AM on a Thursday, so maybe at rush hour it would be more difficult. I took my Vulcan 900 to deal with the faster sections of the road, and because of the comfort.

I didn't stop to visit one tourist attraction which was near enough to the route that I drove into the parking lot, it was the HMCS Haida. I also didn't stop at a cafe on James street, but I passed a lot of them, many with outdoor patios. Again, that's just me. When I was in Paris, I didn't go up the Eiffel Tower either. At least not the part where you pay.

You do see a lot of weird stuff in Hamilton. I was following a van with two huge garbage bags tied to the roof. When I speeded up to pass him before they came off in my face, another car with a mattress on the roof merged in front of me. Not just the mattress but the box spring as well.

I probably need to add more, because Mary Ann thinks this is too abrupt an ending, but basically if you want to, you can do the route yourself, I have a link to Google maps. And if you don't live close enough, try the street view feature.

Picture: I took it myself, a rarity for me. Cormorants in the trees, a bit of steel mill visible in the background if you squint hard enough, and behind that, you can also see another Hamilton feature, the beautiful escarpment.

Map of my route on Google
Copyright the Lost Motorcyclist